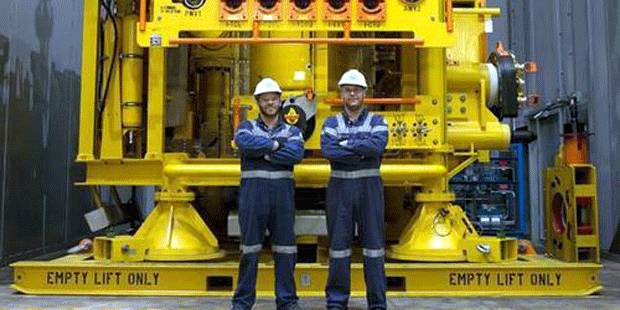 On hand will be Ghana’s top petroleum bureaucrats, led by the country’s Minister of Petroleum, and G.E’s African leadership.
The project will primarily support the ENI operated Sankofa-Gye Nyame integrated oil and gas field development, located in Offshore Cape Three Points (OCTP) block, in water depths ranging from 600 to 1,500metres.

For a duration of 15 years, the Sankofa-Gye Nyame development will drain about 400Million barrels of crude oil reserves at 50,000BOPD at peak. It will supply 180Milliion standard cubic feet of gas to the country’s burgeoning domestic market.
The crude oil phase of the development is expected to come on stream before the end of June 2017.

GE will deliver a total of 21 subsea trees (also known as Christmas Trees, or XTs) for the project –  18 for installation and three for backup. Their primary function is to control the flow – usually oil or gas – out of the wells.

The Takoradi facility received the first two XTs for the Sankofa-Gye Nyame development in the last quarter of 2016.
GE Oil & Gas will also, at this facility, support the customer’s aftermarket needs, with the facility largely responsible for site receival testing and providing support to ENI’s equipment installation campaign for the Sankofa-Gye Nyamme project. Site receival testing involves ensuring the safe arrival of equipment, flushing systems and replacing hydraulic fluids, and making sure there’s continuous, undisrupted communication between the control equipment after they have been deployed offshore.