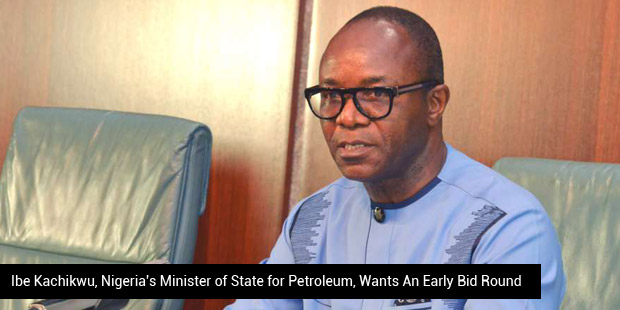 Minister of State prefers to kick start the process at the OTC in May 2017
Nath Ojugbajue, in Abuja

The Nigerian Government is unlikely to have a full auction of all open exploration blocks in 2017, if the Petroleum Industry Bill (PIB) legislations are not passed before the end of the year, but the Minister of state for Petroleum thinks he can at least go ahead with a bid round for marginal fields.
“He is eager to get a bid round done this year”, sources at the Ministry of Petroleum (MoP) affirm, “but the one without any inhibition is the marginal field round”.
Marginal fields in Nigeria are undeveloped discoveries, located in acreages held by oil majors operating in the country. 24 such fields were awarded in 2003, to 31 Nigerian independents. Four more have since been granted, outside the process of a bid round, since then.
Ministry of Petroleum sources say that the proposed marginal field bid round will simply be a continuation of the process begun by George Osahon, the last director of Petroleum Resources under the ministership of Diezani Allison-Madueke, in late 2013. That process was inexplicably discontinued by Mrs. Allison-Madueke.

Nigeria’s MoP sources say it would take service vendors at least six months to prepare and organize the data and other back room processes required to launch the round. “We told him (the Minister of state) that all the service providers we have spoken with, say that they would require up to six months preparing, but he (Dr. Emmanuel Ibe Kachikwu), wants an early date”.
In that case, if the minister doesn’t have his way (which is to announce the bid round at the Offshore Technology Conference (OTC) in Houston in early May 2017), and if those providers were asked to start work today, September 2017 will be the earliest month for the ministry to be ready to throw open the bid round processes.
For a map of likely bid round candidates, please click here.