S/Sudan Opens Up Blocks B1 and B2 To Negotiations 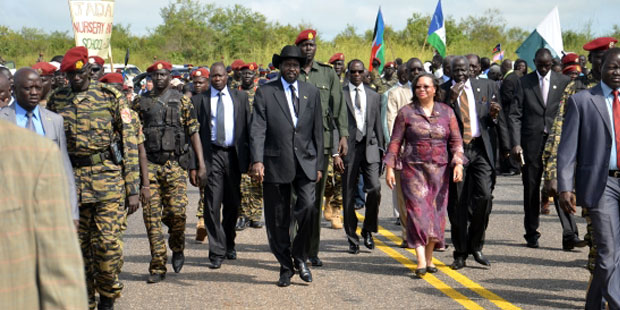 South Sudan’s Ministry of Petroleum says it welcomes the interest of investors for direct negotiations on oil and gas in blocks B1 and B2. The announcement comes after negotiations broke down with the French oil and gas company Total E & P due to irreconcilable differences.

Officials of the Ministry of Petroleum met with representatives of the French major TOTAL in Kampala, Uganda between April 10 and 21, 2017. Also involved in the negotiations to develop an exploration and production sharing agreement (EPSA) for the blocks (B1 & B2) were UK independent Tullow Oil Private Limited Company and the Kuwait Foreign Petroleum Exploration Company (KUFPEC). The negotiations reached an impasse over the proposed exploration period and cost recovery limit.

“Following lengthy discussions with representatives of the company Total we have decided it is in the best interest of South Sudan to open opportunities to other potential investors,” said Ezekiel Lol Gatkuoth, Minister of Petroleum of South Sudan. “We had hoped for a favorable outcome but we believe these large and highly prospective blocks need a fast and ambitious development program to achieve their full potential. B1 and B2 are now open for direct negotiation.”

Blocks B1 and B2 were once part of the 120,000 square kilometer area known as Block B, which was divided into three licenses in 2012. The area is highly rich in hydrocarbon deposits but has experienced very little exploration. In March 2017, Pan African independent Oranto Petroleum Limited signed an exploration and production sharing agreement (EPSA) with the Government of South Sudan for Block B3. The area covers 25,150 square kilometers and has estimated reserves in place of more than 3 billion barrels.

“The resource base in these blocks are enormous and we need committed operators who are ready to invest and work with our government to comply with the laws of our country,” said the Minister. “South Sudan is creating an enabling environment for companies to operate. We want companies to invest, explore, produce and we are ready to offer incentives to investors.”
The Government of South Sudan has adopted a very pro-business stance with the expectation that aggressive investments in the petroleum sector will stimulate the economy. In 2017, the Ministry of Petroleum announced it was planning to double its total oil production by next year. South Sudan currently produces 130,000 barrels per day but can produce as much as 500,000 barrels per day.

The Ministry of Petroleum invites companies to negotiate directly on Blocks B1 and B2. Government officials will be present at the Africa Oil & Power conference in Cape Town onJune 5, 2017 to advance discussions with interested parties.