In Senegal, The Aptian Carbonates Are Not Commercial 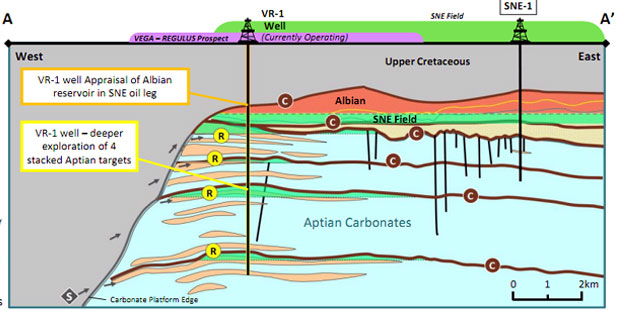 By Sully Manope, in Dakar

Cairn Energy has failed to find a commercial pool of hydrocarbon in the deeper, older reservoirs below the play it encountered in its 2014 discovery of the SNE field in Senegal.

The VR-1 well was loudly applauded in the media as a bigger success than most of the five appraisals of the SNE-1 discovery.” It is a significant step out, some 5 km west from the line of wells drilled to date, including the SNE-1 discovery”, Cairn says. “The results will be useful for the planning of the first phase of development – the lower 500 series reservoirs are the better connected, more tabular, highly productive sands, where water-flooding should yield recovery factors of 30% or more”.
But while VR-1 was primarily meant to evaluate the 500 series reservoirs already confirmed elsewhere, its secondary objective was to test the carbonates below those sands.

“The deeper carbonate exploration targets were encountered as expected with indications of hydrocarbons at the base of the well in tight formation that is not currently viewed as commercial”, the company says in a release.
A significant amount of new stratigraphic and log data has been recorded which will be incorporated into the regional geological model” Still, the company is encouraged that the appraisal results from VR-1 are very encouraging, as the well result confirms the predictability of the mapped reservoir over a wide area giving confidence to the reservoir engineering models”