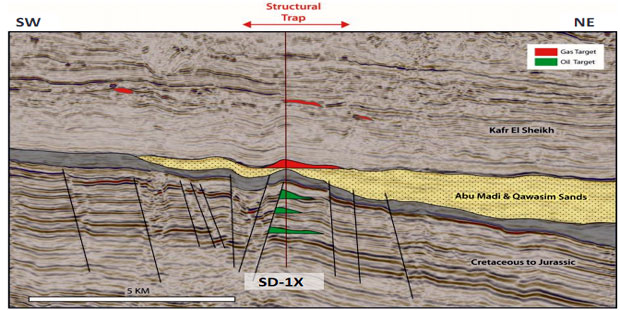 SDX Energy says the initial well test results of the SD-1X well has exceeded its own expectations as operator.
The well is SDX Energy’s first probe in the South Disouq licence in Egypt where the Company has a 55% Operated working interest.

“SD-1X has successfully flowed dry natural gas at a stabilised rate of 25.8 MMscf/d on a 48/64″ choke”, the company says in a release. “This flow rate exceeded initial expectations and was limited by the surface facilities put in place to test the well”.

The well was drilled to a total depth of 7,777ft, and encountered 82 ft. of net pay with an average porosity of 25% in the Abu-Madi section.

SDX-1 has now been shut in for an initial build-up after which a series of additional flowing periods will be conducted and fluid samples taken. The results from the well testing programme will be integrated into the on-going reserve evaluation work.

The results of that exercise will then be incorporated into an early development plan proposal for discussion with our partners and the authority. This information will be included in a future release to the market over the summer.

Working with its partners, SDX will now aim to bring the discovery into commercial production as soon as possible.

« In Senegal, The Aptian Carbonates Are Not Commercial
Cairn’s SNE North-1 Is Unimpressive, But Better than the Last Probe »