Will Egypt Allow Rosneft To Export Gas From Zohr? 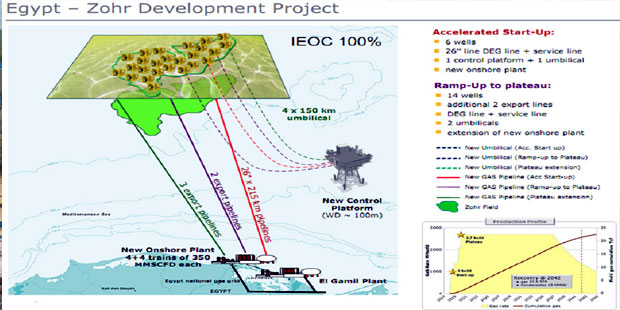 Russian giant Rosneft has been credited in the media as proposing to export gas from Egypt’s Zohr field, the vast deposits in the Mediterranean sea.

Quoting a source in the company, the widely respected Russian news agency, TASS, said that Rosneft, which holds 30% stake in the gas field, “will export gas from Zohr to the countries of Europe and the Middle East”.

But that’s exactly contrary to the expectations of the Egyptian government at this time.

Egypt’s economy was experiencing a severe gas deficit when ENI discovered Zohr in late 2015. The government’s assistance to the operator to fasttrack the field’s development is situated in the proposition that Zohr would help return Egypt back to self-sufficiency in natural gas.

“We will sell gas from the Zohr project when economic conditions are best for it. In this case we will act as a gas exporter from one country to another,” TASS quoted the source as declaring.

The Egyptian government is willing to purchase gas from Zohr for higher than $5 per thousand cubic feet (Mscf). That’s one of the highest gas prices in the world at the moment.

Neither the Egyptian Petroleum Ministry, nor Rosneft Public Affairs, responded to our query.