FALODUN GETS THE BIG HONOUR 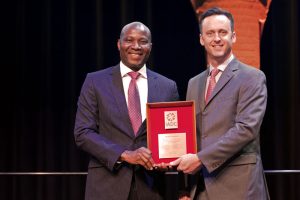 an Exemplary Service Award of the International Association of Drilling Contractors (IADC).

The former chairman of the Nigerian chapter (and the only African chapter) of the association received the honour at the IADC World Drilling Conference and Exhibition 2017, held at The Beurs van Berlage, a picturesque building on the Damrak, in the centre of Amsterdam, The Netherlands.

Mr Falodun was recognized for his service as Chairman of the IADC Nigeria Chapter, as well other contributions to the organization, including serving on the Programme Committee for IADC Drilling Africa. “The spirit of camaraderie and friendship that characterizes our association has been immeasurably enhanced by your presence and generosity of giving up your time and talents to our organization,” Jason McFarland, President, IADC worldwide, reportedly said in presenting the award.

According to a story in The Drilling Contractor, the IADC organ, Mr Falodun noted his gratitude in receiving the award, stating that he was “profoundly humbled.” He further thanked the IADC executive team, including Mr McFarland; Bob Warren, IADC VP Onshore Division; and Mike DuBose, IADC VP of International Development.

“Without hydrocarbons, the world would be a dark place,” Mr Falodun told the conference attendees. “Keep on drilling”.