West Africa Lags Behind In Response to the Oil Price Downturn 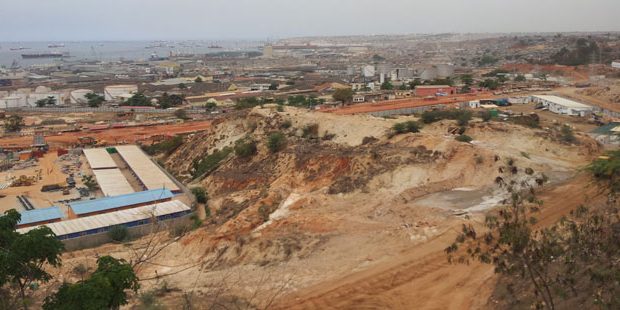 The fall in crude oil price has foisted a significant challenge on the E&P industry.

Things have eased since January 2016, but crude oil price has stabilized at a much lower level than expected. In order to survive and deliver healthy 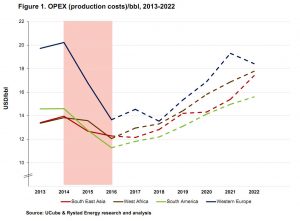 economic results, companies have initiated a string of methods to improving operations. The hydrocarbon industry is about to develop a new standard on how we collectively look upon cost levels, development concepts and efficiency.

By comparing operating cost levels, investments and robustness of future production to low prices in four different regions, we at Rystad have discerned a pattern of how the industry is evolving globally. We have scrutinized how operating costs per barrel and investments (Capex) have changed since the oil price crash in four regions, including West Africa, South East Asia, South America and Western Europe. We have also looked at the impact on how the latter changes have influenced the breakeven price distribution of the production. In other words, how robust future production will effect low oil prices. A region is a coarse geographical entity and may not reflect differences at a country level. However, a region comprises so many projects and fields that the statistics becomes significant and reliable.

Has the industry been able to improve their efficiency – Operating expenses per barrel (Opex/Bbl)
Opex/Bbl is a measurement on how cost efficient the actual oil production is. Until 2014, such expenses were by far the highest in Western Europe (among the four regions compared). The price downturn has made operators in Western Europe work more efficiently, and the cost level has lowered by more than 30% to come down to the same level as in the three other regions in this review. In the same period, South America lowered their Opex/Bbl by about 20%, while West Africa and South East Asia have only been able to lower their Opex/Bbl by 10% each. South East Asia has a declining production, which explains much of the low reduction, while West Africa is falling behind in terms of reducing their operating costs.
Investments (Capex)

The oil price crash has of course had a great impact on the investment level. Previous projects with a robust economy at US$100/Bbl are not sustainable 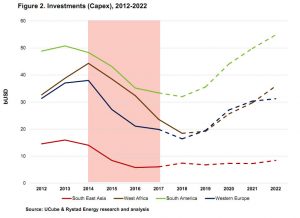 at US$50/Bbl. Many projects have been deferred, re-designed or simply abandoned, which has caused a dramatic drop in investment levels since 2014. Regions that have been able to re-design their projects have seen a lower drop in investment levels. Among the peers, the drop have been most dramatic in West Africa and South East Asia, with an almost 60% decline in investments from 2014 to 2017. The drop in Western Europe and South America has respectively been 45 and 30%. South America stands out as positive in this respect due to the development of its many great discoveries done some years before the oil price crash. Future production will be harmed most where projects have been deferred or abandoned, while re-design will have less impact on future production, apart from the fact that redesign also cause a delay, but only by some few years.
Future robustness to low oil prices

There is no doubt that how the E&P industry is handling the current uncertain market conditions will greatly impact future performance. Decisions and achievements completed in recent years will influence how the different regions will be able to attract and develop the industry into the future. As we have seen, has the efficiency in operations and investment levels developed significantly different from region to region? The issues discussed can also help us to understand how robust the future production in the different regions will be if low oil prices remain for a longer period. Rystad Energy believes the prices to be positioned upwards of US$60/Bbl when we reach the 2020’s. However, oil prices have never been precisely predictable. Therefore we have looked at how much of a portion of future production (in 2020 and in 2025) will need a breakeven price higher than US$60/Bbl.

Production with breakeven prices higher than US$60/Bbl might be at risk, if the world remains as oversupplied as it is today. Among the four regions, West Africa has the second highest portion of vulnerable production if prices remain lower than US$60/Bbl. Only South East Asia has a higher portion of production at risk. 13% of West Africa’s predicted production in 2020 is at risk, while this increases to 27% in 2025. This shows the importance of constant work on cost reductions and efficiency gains in order to remain competitive and economically sound. However, we still forecast a small increase in oil (Crude & Condensate) production from West Africa from 2020 to 2025, while South East Asia is expected to continue its decline.

Summary
As shown, the West African E&P industry has room for improvement on how they run their daily operations. What has been achieved in other parts of the 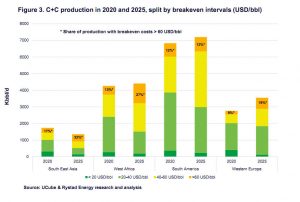 world should be possible, to a certain degree, for West Africa to copy. Efficiency gains will often require a collaborative and open environment between the E&P and OFS industry together with the authorities. We assume there is room for improvement for at least another 10% on the operating costs in West Africa.

Low oil prices have made the industry even more cautious to invest in high politically at-risk and unstable countries and there is no doubt that some regions are hurt more than others by this fact. It is important to understand that doing investments, which will pay off the next two or three decades, requires a stable and predictable investment climate.

In a high-risk environment with low oil prices, we would expect that West Africa is one of the regions in the world that would be harmed most – close to 60% drop in investments the last 3 years. This is partly due increasing maturity, deeper water, more complex reservoirs, but also difficult political conditions in some countries. We would encourage the industry, together with the authorities, to uncover simpler development concepts instead of deferring or abandoning projects to make future production more robust to accommodate lower prices. We see room for improvements on the latter.
Lower operating costs per barrel and increased focus on improved and more efficient development concepts may arrest our prognosis, that West Africa may face a doubling of their production at risk with oil prices lower than 60 USD/bbl.

Whatever the future oil price will be is it evident that both Governments and the industry would profit by working smarter and more cost efficient in a joint collaborative environment.

Author: Henrik Poulsen
Henrik holds an MSc. in Petroleum Geology from the Norwegian University of Science and Technology and is currently Senior Vice President – Government 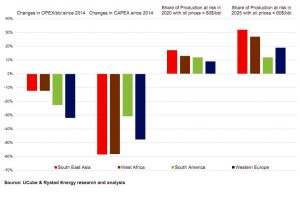 Relations at Rystad Energy. He has more than 25 years of experience in the E&P and oilfield service industry and has worked as a consultant for 15 years in the E&P industry, assessing geological and economic uncertainties. Since 2005, Henrik has held several senior management positions at different companies such as Roxar (Emerson), Schlumberger and Rystad Energy.