Cairn’s SNE North-1 Is Unimpressive, But Better than the Last Probe 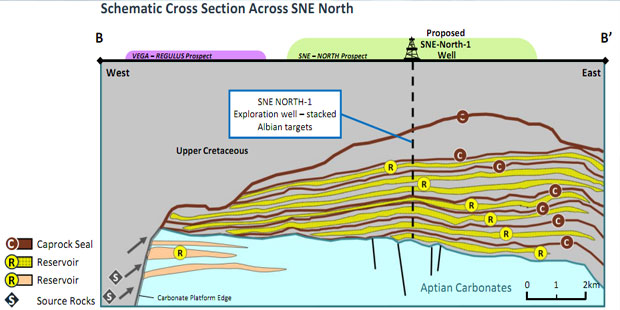 Results of the SNE North-1, Cairn Energy’s most recent probe offshore Senegal, are better than what came out of the FAN South-1 exploration well drilled just slightly earlier.

But the preliminary analysis of the hydrocarbon footage suggests that the reservoirs are not as developed as the equivalent encountered in offset wells SNE 1 and 2.

SNE North-1 is being plugged and abandoned and the Stena DrillMAX rig will be released.

Cairn is trying to sound optimistic about this result, the second consecutive not-so-great result in the Senegal campaign. “Further work is being undertaken to establish the potential commerciality of this discovery and to integrate the results with the block wide data gathered to date”, the company says. “The well result has positive implications for further hydrocarbon potential to the north of the structural trend containing the SNE field and SNE North-1 discovery well, as well as for broader exploration potential in the permit.

SNE North-1 is located in ~900 metres (m) water depth, ~ 90 kilometres offshore in the Sangomar Deep Offshore block and ~15km north of the SNE-1 discovery. The well reached a Total Depth (TD) of 2,837m. Operations have again been safely and successfully completed ahead of schedule and under budget, following drilling and logging.

“A full set of oil, water and gas samples was recovered to the surface. After completing conventional logging, a series of Modular Formation Dynamic Testing (MDT) mini-fracs were obtained across the reservoir section to help calibrate the geo- mechanical model of the SNE field and aid development well design.

“This marks the end of the five well 2017 drilling campaign”, Cairn says. The operator and its partners are reviewing the potential for further exploration drilling operations in 2018, within the Rufisque, Sangomar and Sangomar Deep Production Sharing Contract area.