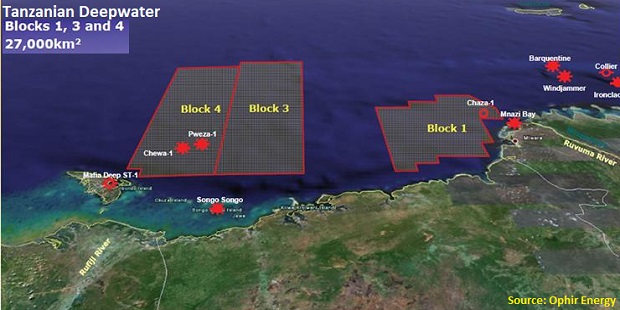 A decade ago, several of the E&P majors turned their exploration eyes on East Africa.
The first half of this decade became an East African exploration success, and major gas discoveries with more than 120 TCF (Trillion Cubic Feet) combined were discovered (Mozambique & Tanzania). A new ‘world-class’ petroleum province was revealed and the optimism in the region soared to record levels, and it might be only the beginning. The undiscovered potential is still very promising and could very well triple already discovered volumes. Mozambique can become the largest petroleum producer in Africa by the mid of the century, if the success continues.

However, the majority of the gas will initially need to be exported as Liquefied Natural Gas (LNG), due to limited domestic markets and inadequate pipeline infrastructure. The liquefaction process and distant transport to the consumer markets add to the breakeven cost of East African gas. Simultaneously, the global LNG-markets (since 2014) have undergone a set back as the rest of the petroleum-markets. Finally yet importantly, comes the COP21 (21st. Conference of the Parties, Paris, December 2015) agreement, and the uncertainty political decisions may have on the future long-term role for gas as a primary energy resource in the global energy mix.

This article discusses in further detail the East African potential to become a significant international LNG supplier, the outlooks of the Asian LNG markets and finally share some aspects on the future fate of natural gas as a primary energy source.

Will it be possible for East Africa to become a significant global LNG supplier?
Several world-class gas discoveries were discovered offshore South East Africa in the years 2010 to 2014. A brand new global petroleum province was revealed. In most cases, major IOCs operate the discoveries with resource ensuring Asian companies as partners. Solid operators will ensure financial strength, technical knowhow and long term mind set. All important factors required when developing and exploiting a new petroleum province. As per today it has been discovered more than 120 TCF, and Rystad Energy estimates the total future resource potential to be around 370 TCF. In other words, the undiscovered potential is twice as big as what has already been discovered. The figure below shows the commercial natural gas resource potential in Mozambique and Tanzania, split by project Life Cycle. Undiscovered potential is marked in light blue pattern, and dominates the volumes. 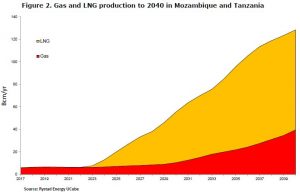 The operator ENI recently reached a final decision on development (FID) of the Coral South gas field in Mozambique. The project will be developed by a floating LNG (FLNG) production unit. The production capacity is (by the operator) estimated to be 3.4 million tons per annum MTPA, equivalent to 4.7 bcm/yr. Rystad Energy believes that this project is only the first in a long row of many more to come in the following years. Anadarko recently reported that the development of the offshore area 1 in Northern Mozambique, comprising an on-shore LNG plant consisting of two initial LNG trains, soon is reaching an FID. The capacity is by the operator estimated to be 12 MTPA or 16 bcm/yr. Tanzania is for the moment lagging behind Mozambique, but should be encouraged by the results achieved by its neighbor to the south, to reach agreements with the operators Shell and Statoil.

Rystad Energy believes first LNG shipment from Mozambique to be in either in 2023 or 2024, and Tanzania to follow 4-5 years later. We estimate that the combined gas and LNG production in East Africa will exceed 120 bcm/yr by 2040, whereof LNG will be the dominant product. As East African pipeline infrastructure is developed (from the 30’ies and onwards) will the piped gas share for domestic use (in East Africa) become more and more dominant. Mozambique’s potential to pipe gas to South Africa could be an engine in this regional development. Below is a figure showing Rystad Energy’s prediction of East African natural gas production split by LNG and piped gas towards 2040.

How will the LNG markets develop – is the world about to become swamped in gas/LNG?
The Asian LNG markets will be paramount for East African LNG export. Similar to the oil market, did the North American shale industry turn the gas markets upside down in 2015. The rapid increased production sourced from shale gas reservoirs made US self-supplied and left the country with a significant export potential. The price of Henry Hub plummeted, and the same effect spilled over to the (Asian) LNG markets. 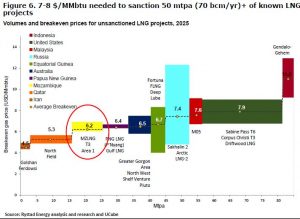 The new LNG price became suddenly dependent on the Henry Hub pricing, as US commenced to export most of its excess production as LNG to other continents. LNG is now priced as Henry Hub + liquefaction- and transport costs. The large numbers of sanctioned LNG projects in Australia and US before the price crash has left the world currently swamped in LNG. Rystad Energy has estimated that the LNG market will remain over supplied to 2023, with a peak in 2020, where the supply capacity excess the demand by almost 70 bcm/yr. However, we predict LNG demand to continue its strong growth as gas is becoming a more and more important primary energy resource in Asia and the Middle East. By the end of the 20’ies, it will be a deficit of more than 200 bcm/yr, if no new LNG-projects are sanctioned for development.

As seen from the figure above, it is likely that by 2023 will the world face a deficit on LNG, due to lack of LNG project sanctioning the last couple of years. Two thousand and twenty three coincides perfectly with prediction of the first LNG to be exported from East Africa. East Africa can/will be instrumental in filling the deficit supply gap in the second half of the next decade. If no projects are sanctioned for development the coming years, will the LNG deficit by 2030 surge to more than 200 bcm/yr. Hence, leaving plenty of room for East African LNG, as shown in the figure below. 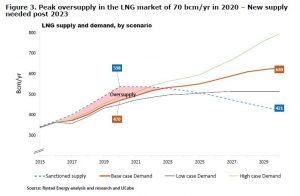 East African LNG will of course face strong competition from other producers, especially Qatar, Australia and Papa New Guinea, in the race for the rising demand in South-East Asia and the Middle East. East Africa benefits from its reasonable vicinity to India and Pakistan compare to Australia. The majority of the growing gas production in the Middle East will be needed for domestic purposes to cover an increased gas consumption. Hence, the production increase in Qatar and Iran will not find its way to Asia. Below is a figure showing India’s predicted need for gas import versus the LNG export from Mozambique and Tanzania towards 2040. It will not be until 20 years from now before East Africa will export enough LNG to cover India’s import needs only. The latter as an indication of future Asian LNG needs.

Rystad Energy has assessed which LNG projects would most likely be sanctioned and developed by 2025. It is predicted that the production deficit gap in 2025 will be about 50 MTPA (70 bcm/yr), which soon need to be covered. By assessing breakeven prices for potential future LNG projects it is possible to predict, which projects will most likely be developed, and to which breakeven cost. An LNG price at 7-8 $/MMbtu is needed in order to develop another 50 MTPA by 2025. Below is a figure ranking potential future LNG-projects to come on stream by 2025 by breakeven price. Projects to the left have the lowest breakeven costs. The development of Area 1 offshore Mozambique (in red circle) has the 3rd. lowest breakeven price (6,2 $/MMbtu) among the most profitable projects believed to come on stream by the mid of next decade.

Which role will gas get in a carbon-restricted world?
The COP21 agreement negotiated and ratified in Paris in December 2015 will probably have a great impact on the future mix of primary energy sources. Fossil fuels, and especially coal, will be taxed in order to curb the markets. Coal, as gas, is predominantly used for power generation. Coal is cheap, scalable and reliable with low or no disruptions. The same characteristics apply for gas. However, coal emits about twice as much CO2 per energy unit as gas, which makes gas more attractive if the consumer has to pay for the emissions. Three countries, China, US and India, currently 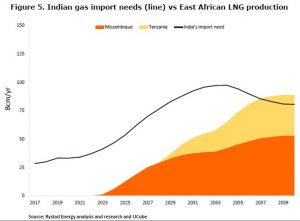 count for 50% of the global CO2 emissions. Thanks to lowered gas prices (shale revolution) in US, which made gas more competitive over coal, has the world’s second biggest emitter been able to reduce its annual CO2 emissions by more than 700 million tons (about 10%) since 2007. What happened in US is likely to happen in the two biggest coal consumers, China and India, as well. Replacing coal power plants with gas plants has shown to be the most effective step towards a less carbon-emitting world. This partly explains why gas consumption in IEA’s ‘2-degree scenario’ is expected to increase by 12-14% towards 2040. Gas will to a quite large extent need to replace coal. The highest gas consumption growth will come in Asia and the Middle East when coal and oil are abandoned and replaced with gas as power generator. Africa’s dire needs for energy and power in their race for raised prosperity, will also play a significant role in the future hunger for gas.

As shown in this article, East Africa has a considerable potential to become a significant LNG exporter. Less tight LNG markets from the mid 20’ies provides good timing for East African LNG. Price competitive development, vicinity to main markets and steady growing Asian LNG (gas) demand should ensure East African LNG export for several decades to come. However, Mozambique and Tanzania need to continue to court the industry to leverage their discoveries and ensure revitalized exploration. Building a sustainable E&P industry needs both the industry and the government to co-operate and to wear the ‘generation perspective glasses’, in order to become a success. 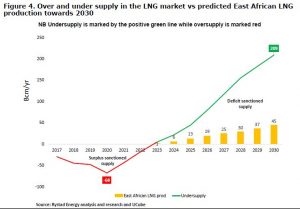 Author: Henrik Poulsen
Henrik holds an MSc. in Petroleum Geology from the Norwegian University of Science and Technology and is currently Senior Vice President – Government Relations at Rystad Energy. He has more than 25 years of experience in the E&P and oilfield service industry and has worked as a consultant for 15 years in the E&P industry, assessing geological and economic uncertainties. Since 2005, Henrik has held several senior management positions at different companies such as Roxar (Emerson), Schlumberger and Rystad Energy.