Dangote’s Gas Project Is the Riskiest of the Industrial Quartet 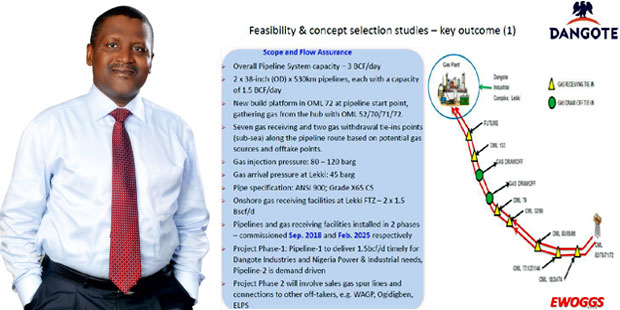 Dangote Industries’ proposed 1,100kmdeepsea pipeline from the Niger Delta to Lagos, Nigeria’s top commercial hub, is the most uncertain, from a business perspective, of the four projects under development at the company’s Lekki Port complex.

Whereas there’s clear demand for petroleum products and fertilisers from the refinery and fertiliser complexes under construction and the Petrochemical Plant will have customers, the domestic gas market, which the pipeline is expected to serve, is severely challenged.

The East-West Offshore Gas Gathering System (EWOGGS), as it is christened,consists of two 38 inch, 550km pipelines, each with a capacity of 1.5 Bcf/day. The two pipelines will be running side by side.

Take the560MW Qua Iboe Independent Power Plant for example. It is going to be built by Black Rhino, with which Dangote is a partner. It is located in the vicinity of the EWOGGS’ take off platform and had been widely assumed to be the EWOGGS’ most likely first customer. But that’s a wrong assumption. The gas for QIIPP will be supplied by ExxonMobil, whose Joint Venture with state company NNPC will build a 400MMscf/d processing plant for gas from OML 70, primarily for that project and ultimately for the Nigerian domestic gas market.This fact alone places a direct competition in EWOGGS’ face.

Indeed, the Dangote Industries’ published list of acreages from which the EWOGGS is expected to extract natural gas, begins to look doubtful, with a little bit of scrutiny. The list includes ExxonMobil operated OMLs70 and 138, Amni operated OML 52, Shell operated OML 77, Sunlink held OML 144 and First E&P held OMLs 71 and 72, in which West African E&P, a Dangote subsidiary, has significant stake. Of this list, the gas fields that are ready to come on stream are those in ExxonMobil’s OMLs 70 and 138 and Shell’s OML 77. A Dangote document actually lists OML 138 as scheduled to provide 10% of the 3Bcf/d EWOGGS capacity, but ExxonMobil does not have any agreement yet with Dangote Industries Limited, nor does Shell.

Sunlink has been desperate to monetise its gas in OML 144, As such it is keen to get in board; First E&P will deliver on OMLs 71 and 72, but It’s not clear what arrangement Amni has with Dangote.

Dangote Industries’ expectation is that Africa’s most populous country should be able to utilize 10Billion cubic feet of gas per day, in its power plants and factories, by 2020.

In the last 12 years, the state has built over 10 thermal power plants with nameplate capacity in excess of 5,000MW, expected to be fueled by natural gas. But the volume available has been held down by “in-sufficient Investment focus to grow the required supply capacity”, according to a concept note by the Dangote group, which it shared with Nigeria’s Vice President Yemi Osibajo, in 2016.

Current gas consumption by factories, power plants and Gas based industries in Nigeria is slightly less than 2Billion cubic feet per day (Bcf/d). Growth in these sectors is reportedly constrained by inadequacy of supply of natural gas.

But the big challenge is the absorptive capacity of the market itself.

The bulk of the gas produced for the Nigerian market is for electricity, an industry considered rather unstable at the moment. “The power sector is beset by “illiquidity, price and securitization challenges”, says Dada Thomas, President of the Nigerian Gas Association. “Lurking behind these monsters are the secondary diseases of inadequate and dilapidated power transmission and gas distribution infrastructure, low economic returns for gas projects”. Other Gas and power analysts have lamented the obstructions imposed by offtake assurances vis-à-vis pipeline tariffs, funding mix and failure of payment guarantee structures.

And yet there are projects under construction and in feasibility studies. Shell and Seplat are collaborating on the Assa North Ohaji South (ANOH) project, which will deliver 600MMscf/d at peak, to the Nigerian market.

This story benefited from extensive excerpts in the piece Huge Ambition, Hefty Risk, at $3Billion, published in the February/March 2017 issue of Africa Oil+Gas Report.