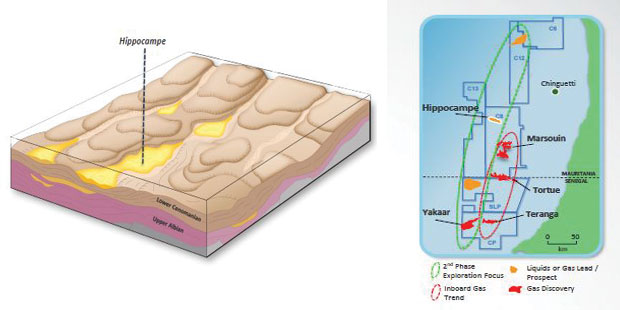 This prospect failed due to a lack of charge access

Kosmos Energy, widely regarded as a leading hydrocarbon finder in Africa’s frontier, has come up with a duster off Mauritania, the first in its recent history.

The Hippocampe-1 exploration well is supposed to be one of those probes outboard of the gas discoveries that Kosmos had been making off Mauritania. The search was for oil in as the company’s geoscientists described it: Large, out – board basin floor fan reservoirs trapped primarily stratigraphically, potentially charged vertically with oil / liquids.

Instead, the well “encountered well-developed reservoirs in both exploration targets but these proved to be water bearing”. Hippocampe-1 was drilled in approximately 2,600 meters of water in Block C-8.

Hippocampe-1 was designed to test Lower Cenomanian and Albian reservoirs charged from the deeper Valanginian-Neocomian source, the well was drilled to a total depth of 5,500 meters. The well will now be plugged and abandoned. Kosmos’ geoscientists believe that this prospect failed due to a lack of charge access in this part of the play fairway.

Andrew G. Inglis, Kosmos Energy’s chairman and chief executive officer, said: “Following on from our Yaakar discovery earlier this year, Hippocampe-1 is the second of four tests of independent prospects located in the outboard basin floor fan fairways in our Mauritania and Senegal acreage. Although the well did not encounter oil or gas, it has, together with Yaakar, confirmed the presence of quality cretaceous reservoir in the outboard basin floor fans, which contain multiple leads and prospects, more than 200 kilometers from the north to south through our blocks.

We are still in the early stages of opening this newly emerging basin and our forward drilling program remains unchanged given the independent nature of the prospect tests, in particular with regard to charge.”

Kosmos holds rights in the C-6, C-8, C-12, C-13, and C-18 contract areas under production sharing contracts with the Government of Mauritania’s Société Mauritanienne Des Hydrocarbures et de Patrimoine Minier (SMHPM). The blocks range in water depth between 100 and 3,000 meters, and have combined acreage of over 40,000 square kilometres gross. Kosmos is the exploration operator of Block C-8 with 28percent equity and is joined by its partners BP 62% and SMPHM (10%).

« SDX Expects To Finalise KSR-14 in Mid-October
Kosmos Drills Two Dry Holes, Back To Back In NW Africa »