Aliko and the 40 Indians 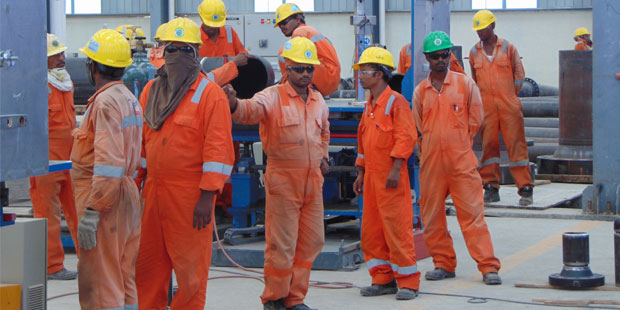 I was allowed to gate crash into a party meant exclusively for CNN in the middle of May 2016.
It was a conducted tour of the site of the Dangote refinery, part of a quartet of industrial projects under construction on over 5,000 acres of reclaimed land, in the eastern flank of Lagos.

Our convoy drove on a recently piled sand filled road for over 90 minutes, stopping at points to take in the geography of what place had been earmarked for the Petrochemical complex, the Fertiliser plant, the receptor terminal of the gas pipeline from the Niger Delta fields; the jetty to which crude oil arrives the refinery and from which petroleum products leave it.

I should be grateful to my hosts, who filled in my name and my colleague’s at terribly short notice. The Dangote Industries management gave me as much 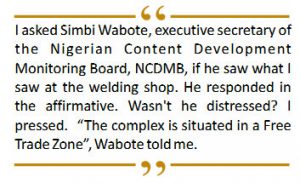 access to market intelligence about the $12Billion project as they gave CNN. If there was any information that I missed, and the CNN gained, it was more to do with journalistic enterprise than opportunity.

I say this because, ordinarily, Dangote Industries doesn’t routinely respond to queries from local journalists. The big stories about the company’s projects are those that filter in from the multinational news organisations: Financial Times, Bloomberg and the likes of CNN.

As we were ushered into the welding shop on the fertiliser grounds that Saturday afternoon, I noticed that only two of the over 50 welders in that shop were Nigerians. This minority looked awkward to me and I could sense their anxiety.

One had an air about him that suggested he was probably a supervisor but lacking authority. The other stood in the far corner of the shop, his two hands loosely hanging by his sides. He couldn’t join the buzz of conversation around him because he evidently didn’t belong.
Every welder in that vast room, apart from these two, was clearly an expatriate from the Indian sub- continent. I had to take photographs.

“I thought that this was an operation to benefit the Nigerian workforce, among other things”, I said to Tony Chiejina, Dangote’s Public Affairs manager, who I had known for over 30 years. “How come that in the first place that we are encountering a large workforce on this tour, there are hardly any Nigerians?”

“The type of welding we’re doing here is rather far advanced”, Chiejina replied. “We had to look outwards”. 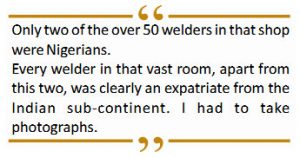 Chiejina’s response was clearly off the mark. The Nigerian hydrocarbon industry teems with skilled welding talent, at every stage of the welding hierarchy. I should know. I have reported, elsewhere in this medium, a quote by a facilities engineer who used to be my colleague at Chevron, the American oil major: “The guys who worked as welders on the Agbami (a $10Billiondeepwater field development project), are riding Okada (Motorcycle Taxis) in Port Harcourt now”, he had said. “There are just not enough projects to keep people employed”.

In the midst of this absence of projects, a huge construction site like Dangote’s will have just about any homegrown welder it wants. And yet it has chosen to go abroad to source this mostly rudimentary skill set.

Unsatisfied with the response of the company’s official spokesperson, I took my query to his boss. Mansur Ahmed is the Dangote Group’s director in charge of stakeholder relations and corporate communications. When I asked him about the overwhelming number of Indian welders and the clear negligible number of their Nigerian counterparts, he admitted he had noticed. He didn’t attempt to bullshit. He merely shook his head to my query. I understood.

The Dangote Group has been accused of not involving Nigerian owned engineering service companies in the construction of its mammoth industrial complex. Such charges have been dismissed by company consultants who argue that the country lacks enough capacity in the requisite areas.

“Refinery construction is based on licensed patented technology”, said Jide Soyode, technical advisor to Aliko Dangote, founder and proprietor of the Dangote Group. He was re-affirming the statement already attributed to him elsewhere in the Nigerian business media. “So, how much of this technology exists in Nigeria? The last time such was done in Nigeria was 30 years ago and it was not done by any Nigerian company,” he told me, repeating what he said in Vanguard, a local newspaper.

In late October 2017, I ran into Simbi Wabote, executive secretary of the Nigerian Content Development Monitoring Board, NCDMB, the regulatory agency set up to monitor compliance of local content in the oil industry.

I knew that he and members of his board had been conducted on a tour of the Dangote Industrial complex, as recently as August 2017, so I asked him if he saw what I saw at the welding shop. He responded in the affirmative.
Wasn’t he distressed? I pressed.

“The complex is situated in a Free Trade Zone”, Wabote told me, so the NCDMB can’t act on that clear case of poor compliance with the National Content legislation. The NCDMB board discovered on the tour that Dangote Industries was ignorant of the availability of certain technologies that have been domiciled in the country. “We told them there were at least four coating plants”, Wabote said. “They didn’t know about that”.

Was Dangote feigning ignorance of some of the engineering capacity domiciled in-country?
PETAN, an umbrella group of Nigerian oil service engineering contractors, continuously campaigns against being shut out of the jobs in the Dangote industrial complex. “There are many components of a refinery”, Bank Anthony Okoroafor, PETAN chairman, has been quoted as saying. “There is a tank farm that would have several storage tanks; we have storage tanks for crude, and storage tanks for finished products. They would have pipelines. There are pipelines instrumentations, civil engineering works, metering, and all these components can be done by PETAN companies”.

I try to separate the claims and counter-claims between Mr. Soyode and PETAN regarding services available in country,from the symbolism of what I witnessed in the welding shop that afternoon in May 2016. The point is, whether or not you engage Nigerian service providers, it is not the most optimal thing to do, in a third world country of 180Million people with over 40% unemployment, to import welders from Asia for a job as basic as welding.

Dangote Industries has talked up its commitment to building technically honed Nigerian workforce.It has made noises about sending Nigerian engineers to India for training in batches of 50. For these engineers, it says there will be classroom training for one month, and on the job training for one year, which involves working with real time experts in the industry everyday. In a presentation to the Nigerian Vice President months before my visit, the company said it was engaging 7,500 people in direct and indirect jobs and will have 60,000 contractors and 10,000 service providers on site during the project stage of the refinery construction.
Given what I saw, I wonder what to believe.

This article was first published in the November/December 2017 edition of the Africa Oil+Gas Report, and launched at the 35th conference of the Nigerian Association of Petroleum Explorationists (NAPE).

« Africa: The Liberal Electricity Market Is In Tatters
Why Ghana Fawns Over ExxonMobil »