Why SEPLAT Wants In On Addax Sale 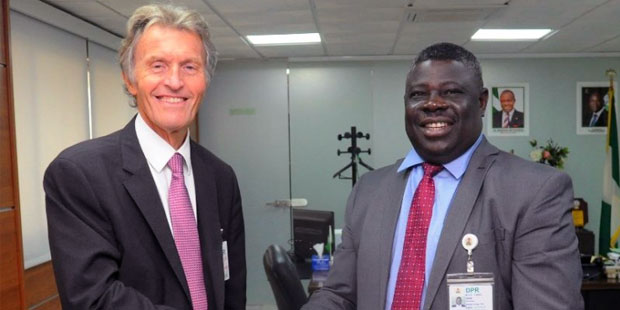 Seplat Petroleum is interested in acquiring Addax Petroleum’s Oil Mining Lease (OML) 124, onshore Eastern Nigeria and it is willing to move, once there is certainty that Sinopec, the parent company, is divesting the company’s assets in Nigeria and Gabon, as variously reported.

Seplat has been proactive enough to call BNP Paribas, the bank that reportedly had the mandate to dispose of the assets, to find out if it could indeed proceed to purchase.

“We were told they (the bank) didn’t have the mandate”, a Seplat source told Africa Oil+Gas Report.

Colin Klappa, Addax Nigeria’s new Chief Executive Officer (pictured left in the photo), is reportedly disinclined to the sale of Addax’s hydrocarbon assets in Nigeria, although the matter may be out of his hands. Plus there is a court challenge to selling the properties.

It is to Seplat’s advantage to ‘annex’ OML 124, which has such upsides as Njaba and Uta discoveries, as well as the producing Izombe field, with its (Seplat’s)) own OML 53, which sits directly to the south and shares a boundary with OML 124.

« BP’s Gas Success in Egypt Makes Oil Look Uncool.
Nigerian Bid Round May Not Happen Until After 2019 Elections »