Why Ghana Fawns Over ExxonMobil 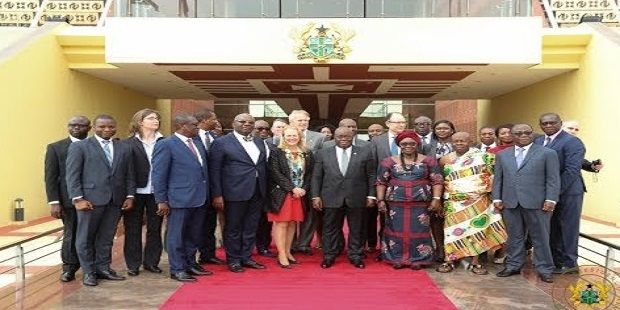 Pamela Darwin, ExxonMobil’s Vice President for Africa, could not have hired a savvier manager for her company’s reputation in Ghana than Boakye Agyarko, the country’s Minister of Energy.

“We couldn’t have found a better partner”, he told President Nana Akufo- Addo, at a state house reception for the supermajor’s representatives, after a Petroleum Agreement had been inked with the Ghana National Petroleum Corporation (GNPC), for the Deepwater Tano Cape Three Points Block(DWT/CTP), last January.

The event was aired on prime time National Television.

“ExxonMobil is the largest, publicly listed oil company, with deep pockets, technical know-how, both of equipment and people”, Agyarko gushed. “It’s our good fortune that we found them as partners to work with”.
Ms. Darwin gaped all the while at the minister. “As you said, we…” she commented, when it was time to respond. She had so little else to say.

Ghana is clearly excited to have a major oil company join the race to find hydrocarbons in the country.
It is 11 years since the first sizeable commercial find was made in the waters offshore the old Gold Coast, West Africa’s second largest economy.

There have been three field development sanctions, and commissioning, since that discovery; a feat for both country and continent.

But the roaster of international and local companies operating in Ghana has read like a list of the junior explorers on the oil patch.

Apart from Italian player, ENI, every other operator is a minnow. Anadarko, a senior American independent which has a position in the acreage hosting the Jubilee field, is content to be a passive participant. Russian giant Lukoil made a minor discovery, but considered itself so unlucky it handed back its stake. Weeks after the GNPC agreement with ExxonMobil, Hess Corp, a sizeable American independent, sold its Ghanaian assets to Aker Energy, a smaller Norwegian explorer.
Even small sized Eco Atlantic, known better for its enthusiastic press releases about its Namibian operations than any ambitious work programme, has walked out.

Tullow Oil and its partners have delivered so consistently on the Jubilee and TEN Fields, with their 2017 output in excess of 150,000BOPD, that they mask the country’s real challenges in attracting passionate, highly capitalised opcos.

In the last five years it had seemed like Ghana was destined to work with companies with shallow pockets. The GNPC signed agreements with ERIN, a cash strapped company struggling with debt in Nigeria, its heartland; Sahara, which has so much on its plate, from electricity generation and distribution through crude oil trading, to a string of exploratory and producing acreages, that it scarcely pays heed to its E&P operatorships; Springfield, a Ghanaian minor with large ambition but little money to realise it; Britannia U, which has produced off and on from its small marginal field in Nigeria, a hardly applaud able performance. Meanwhile AGM, linked to AGM Gilbraltar, reportedly includes AGR, said to be one of the world’s most experienced deep-water drilling companies, as well as Minexco and MED Songhai Developers Limited. So the consortium’s main claim to a pedigree is AGR. But, look carefully, AGR has never been an operator. It’s a service company. The Group was renamed Petroleum Services Group and delisted from the Oslo Stock Exchange in 2014.

One company which could run ahead with the ball is Amni Petroleum. The Nigerian producer operates a string of oilfields in its home country, is involved in current drilling campaigns, and is activating a field development plan for a newly acquired acreage. But that said, can Amni drop all the $50Million required to drill a well to prove the highly prospective plays it claims it has in the Central Tano Block? Not at all. Amni is in the market for a well -heeled partner to deliver a work programme in Ghana.

All of which explain Mr. Agyarko’s excitement about having the world’s largest, publicly listed company showing up to take a position, especially in ultradeepwater, between 2,000 and 4000 metre water depth, of that country’s segment of the south Atlantic.

The story is that the discussions go back to April 30, 2015, when the former Minister of Petroleum and the Ghana National Petroleum Corporation (GNPC) entered into a Memorandum of Understanding (MoU) with the oil giant.
ExxonMobil’s January 18, 2018 signature with Ghana is certainly in sync with the current trend of Big Oil swooping on frontier acreages in Africa and taking exploration acreages, especially as certain smaller Western independents, who have dominated the frontier, have gone on the retreat.

But if we recall that ExxonMobil has been keen on getting into Ghana for close to a decade now, we realise that the story is far more complicated than a simple ‘Junior versus Big Oil’ issue.
Back in 2010, Ghanaian authorities were averse to negotiations between ExxonMobil and Kosmos Energy, involving the former’s proposed acquisition of Kosmos Energy’s stake in the Jubilee and nearby fields, for a reported value of $4Billion.
I recall attending sessions of the Offshore West Africa conference, back in 2009/2010, when ranking ExxonMobil managers from Nigeria, took advantage of the conference location in Accra, Ghana’s capital city, to push the case for their wish to win a tract in the country.

The negotiations failed under the weight of mistrust between the Ghanaian state and Kosmos Energy, over the relationship between EO, the local content partner in Jubilee and Kosmos.

But that was then; as the junior versus Big Oil theory goes, the majors, in those days, 2005-2014, generally moved in after the minnows had made the discoveries in the African frontier. (People cite TOTAL’s entry into Uganda and Kenya, as example of that tendency, but again, the matter is not as straightforward).

Nowadays, the majors go everywhere in the frontier: BP in Mauritania and Senegal; TOTAL in Uganda, Kenya, Cote d’Ivoire; ENI in Morocco, ExxonMobil in (both proven and unproven tracts) in Mozambique.

They are developing the biggest fields, charting the riskiest undrilled acreages.

Yes, this part of the story is not complicated. The majors are taking newer, larger swaths of African territory than they’ve done in a while.

However you look at it, Ghana considers itself fortunate to be part of this evolving story.

« Aliko and the 40 Indians
If You are in Oil and Gas, You Should Be Worried »