Tanzania: When Will The Trickle Become A Flood? 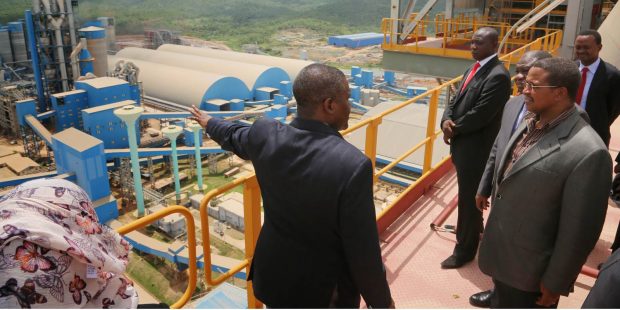 By Toyin Akinosho
Electricity increase will creep, and the country will slowly expand the current 160MMscf/d domestic market….
There are three development licences on the Tanzanian hydrocarbon concession map.
The Songo Songo, Kilwani North and Mnazi Bay licences, are all gas producers, collectively outputting around 160Million standard cubic feet of gas per day (160MMscf/d).
The Orca Exploration operated shallow offshore Songo Songo gas field produces 70MMscf/d (comprising both the Protected Gas and the Additional Gas*). The Kilwani North project, operated by Aminex, averages 10MMscf/d. The Maurel et Prom led Mnazi Bay project delivers 80MMscf/d.
These three projects, which are in onshore and shallow water terrains**, supply gas to seven power plants and several industrial customers.
Given the government’s published plans for more gas fired electricity plants, it would be easy to assume that the natural gas demand will surge.
That is what Orca, Aminex and Mauriel et Prom and its partners are hoping for.
“The Government of Tanzania intends to increase the installed power generation capacity from 1,583MW to 10,000MW by 2025”, Orca wrote in a report released in 2017, citing the Tanzanian Power System Master Plan 2016 and the Electricity Supply Industry Reform Strategy 2014(updated in 2016). “4,000MW of the increased capacity will be attained through the installation of new gas powered plants”.

Last year, Maurel et Prom and Partners in the Mnazi Bay project published a list of pending power plants and industries whose “imminent gas demand” are 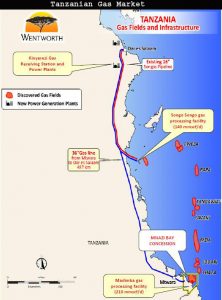 expected to boost the project’s supply to 300MMscf/d by end of 2019.
It is close to mid-2018. And 2025 is just seven years away.
True, some of those plants are up and running, even at optimum. The Kinyerezi-1 power station operated at near full capacity during the second half of 2017 and the Kinyerezi-2 commenced commissioning during Q4 2017.
But overall, the Government’s estimates that the total power demand will increase by 8% per annum is not being converted to actual market activity. By its own admission, the completion dates for five near term planned Gas Powered Plants, expected to consume 294MMscf/d to generate 1,376MW, “are likely to slip, given the size and financial commitments required to complete the projects,” Orca reports.

What’s clear is that Tanzania, unlike South Africa, Egypt and, to a lesser extent, Nigeria, does not bear an acute hunger to be an industrial economy.

And yet these companies “see” opportunities in the Tanzanian energy ecosystem.

Aminex will expand production of the Kilwani gas field, it says in its updates, and put the newly discovered Ntorya field into production. “Existing plant and gas sales agreements have sufficient capacity to permit rapid integration of any future Kiliwani discoveries”, the company reports.

Orca is hoping to finalise Gas Sales agreement with TPDC and increase its production from Songo Songo. The Company has also identified and is developing additional markets among existing industrial customers, new industry and Government gas-fired power generation which, based on current forecasts, has the potential to contract for sale all of the existing and potential new productive capacity of the Songo Songo field to the end of the license.
Orca’s subsidiary, Pan Africa Exploration, operates three wells, two of which are in production (SS-10 and SS-11) and one of which is not (SS-12 requires platform and flowlines). Including the Songas wells, current production capacity is 155 MMscf/d which can be increased to 180 MMscfd/ once SS-12 is tied into the country’s main gas infrastructure network.
*The Production Sharing Agreement (PSA) between Orca Petroleum, the Tanzanian Petroleum Development Company (TPDC) and the Government of Tanzania defines the gas produced from the Songo Songo field as “Protected Gas” and “Additional Gas”. Under the terms of the Gas Agreement, TPDC has assigned its rights to sell or otherwise dispose of the Protected Gas to Songas Limited. Songas utilizes the Protected Gas as feedstock for projects it has designated to supply gas.

**The projects discussed in this article are all entirely onshore and shallow water and outside the deep water licences, which reportedly hold over 45Tcf, and have been subject of so much debate about Tanzania’s export potential.