Depthwize Was On Full Throttle When Fire Engulfed The Majestic 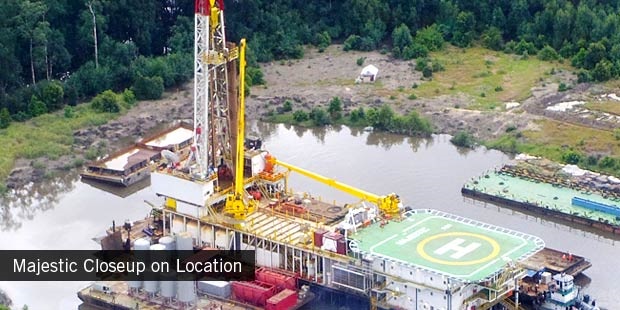 Depthwize was about to be back in full throttle, when fire came as a spoiler.

Two years after an accident on an ExxonMobil pipeline which led to some curtailment in operational activity, the company was back in full business. For most of the month of May 2018, its rigs were on two locations, in east and west Niger Delta basin, with a third one being mobilised.

With three rigs deployed, the contractor was on course to be the second busiest rig operator in the country for the month, tying for the post with Shelf Drilling, the multinational driller, both of them racing after the SEEPCO owned British Oil and Gas Exploration.

But fire engulfed Depthwize’s swamp barge Majestic, which had just finished carrying out a re-completion on one of the wells on Conoil operated Ango field, on Saturday, May 26, 2018.

The raging inferno burnt down significant parts of the rig, but did not affect the well. Major Abdullahi Ibrahim, spokesman of the Operation Delta Safe (ODS), an arm of the Joint Military Task Force in the Niger Delta, said that all personnel on board the rig were successfully evacuated.

Ote Enaibe, Depthwize’s Head of Business Development, said that the company was still investigating the exact cause of the fire.

Elsewhere, Depthwize was doing okay. The company’s other swamp barge, Imperial had spud Moni Pulo’s Inaha 1 well, drilled to 1010ft and set 20 inch casing. It continues on the well throughout May and into June 2018. The company was also mobilising its jack up Monarch for the crucial well testing on Conoil’s cretaceous well, Toju-Ejanla.

The inferno on the Majestic happened two years and 10 days after Depthwize’s first accident. In mid May 2016, the Monarch impacted the pipeline which pumps hydrocarbon fluids from Oso condensate and Usari oil fields to the ExxonMobil terminal at Qua Iboe.

The damage on the pipeline was severe enough to cause a halt to a portion of ExxonMobil’s entire crude oil production. Depthwize’s insurance paid for the repairs on the pipeline, as it is about to do now, to fix the Majestic.