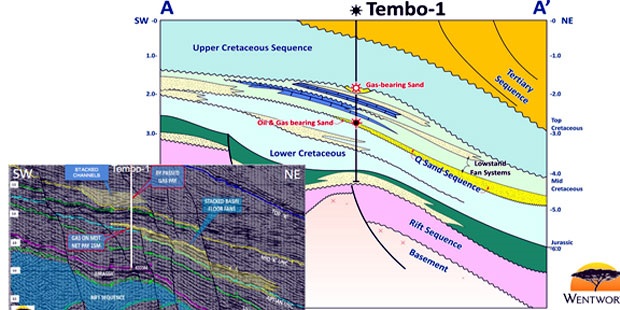 The Norwegian explorer Wentworth Resources, has reported “above ground security situation in and around the Macimboa da Praia and Palma regions”, onshore Mozambique. The area is adjacent to the Tembo block on which Wentworth made a gas discovery well, Tembo-1, in December 2014.

The company says that the situation “remains challenging” and has “prevented safe access to the area for Wentworth staff and contractors”.  Wentworth says it “continues to monitor the challenge closely”.

The report was primarily about a one year extension granted on the Tembo licence by the Instituto Nacional de Petroleo (“INP”), the country’s petroleum industry regulator. That extension takes effect from 16 June 2018 “and enables Wentworth, along with its partner Empresa Nacional de Hidrocarbonetos (ENH), to continue to progress pre-drilling activities in the Tembo block”.

But part of the reason for requesting for extension was because security issues had made it difficult for an optimum work programme to be delivered in a timeous fashion. Last April three women and three children escaped from a hideout of the armed groups that have attacked villages in the area, located in the northern part of Cabo Delgado province. They were taken in by the police. There have been infrequent attacks in the Macimboa da Praia district since October 2017, when two gangs of men attacked three police stations. At least two police officers and four other elements of the security forces were killed, as well as an unknown number of attackers.