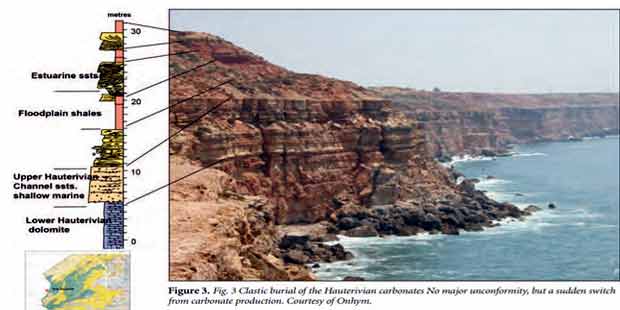 Royal Dutch Shell has joined other majors in the rush for hydrocarbon opportunities in the Northwest African segment of the Transform Margin.

The company signed two Production Sharing Contracts with the government of Mauritania, the only country so far in that geologic province, where crude oil has been produced.

The contracts are for the exploration and potential future production of hydrocarbons in the offshore blocks C-10 and C-19.
The two tracts are located offshore, in water depths ranging from 20 to 2,000 metres. The total area of two blocks is approximately 23,675 square kilometres. The new block C-10 consists of three previous blocks – C-10, C-28 and C-29.
BP, ExxonMobil TOTAL and ENI have taken positions in this part of the continent, mostly in Senegal and Mauritania. Chevron has interests in Morocco, which is in the northernmost flank of the margin.

Crude oil was discovered in Mauritania’s Chinguetti field in 2001 and brought on stream by Woodside in 2006. The rapidly depleted output forced out the Australian independent from the asset, barely a year after first oil.
But the point had been made; Mauritania was an oil producer,Senegal is the next country in the region to be an oil producer, that is if the development plan devised by Cairn Energy and Woodside comes to fruition, delivering 100,000BOPD, at peak from the SNE field, with 2023 as tentative date for first oil.

There has, however been only gas discoveries in the province, since the SNE field was discovered in 2014.
Shell, itself a net gas producer, will operate the exploration programme with a 90% interest. Société Mauritanienne des Hydrocarbures et de Patrimoine Minier, the national oil company of Mauritania, holds a 10%.

Following the customary government approvals of the contracts, Shell will set up an office in Nouakchott and begin exploration activities, starting with reprocessing and analysis of existing seismic data and acquisition of new data.

Shell and the government of Mauritania have agreed in a Memorandum of Understanding to jointly evaluate further offshore exploration opportunities, examine new ways of meeting the country’s domestic energy needs, and build capability in the energy sector.