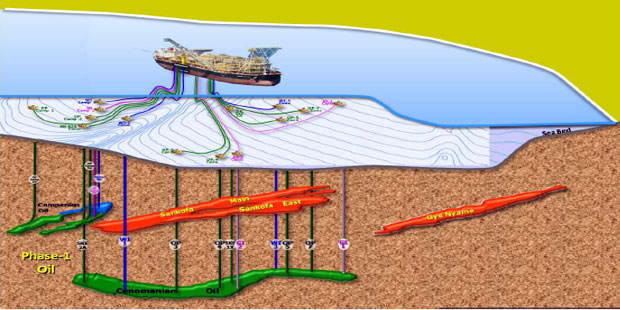 Production of natural gas has started offshore Ghana, from two of the four deep-water subsea wells in the Sankofa field, connected to the Floating Production, Storage and Offloading (FPSO) vessel “John Agyekum Kufuor”.

The gas producing part of the Offshore Cape Three Points (OCTP) Integrated Oil and Gas Project, is scheduled to provide 180Million standard cubic feet per day (MMscf/d) for at least 15 years, “enough to convert to gas 40% of Ghana’s current power generation capacity”, according to a statement by the World Bank.

“After the final steps of commissioning of the offshore facilities, production will gradually flow via a dedicated 60km pipeline to the Onshore Receiving Facility (ORF) in Sanzule, where gas will then be compressed and distributed to Ghana’s national grid”, says ENI, the Italian giant who is the project operator.

The headline price for sale to power generation companies is of $9.8 per Million British Thermal Units ($9.8/MMBtu), or roughly $9.2 per thousand cubic feet ($9.2/Mscf).

The World Bank is heavily involved in the $7.7Billion OCTP project, largely because of this gas component. The bank helped devise a payment mechanism “that ensured all the receipts from the on-sale of the Sankofa gas to the power sector in Ghana flowed to a single designated account from which the private sponsors would be paid in priority for their share of the gas. Should there be any payment shortfall under the Gas Sales Agreement, the sponsors would be able to access an escrow account funded by GNPC with the equivalent of 4.5 months of gas sales ($205Million)”.

“OCTP is the only deep offshore non-associated gas development in Sub-Saharan Africa entirely destined to domestic consumption”, ENI reports. “The project has a strategic relevance: gas from OCTP can help Ghana shift from oil-fueled power generation to a cleaner power source, with financial as well as environmental benefits, and contribute to the Country’s sustainable economic development”.