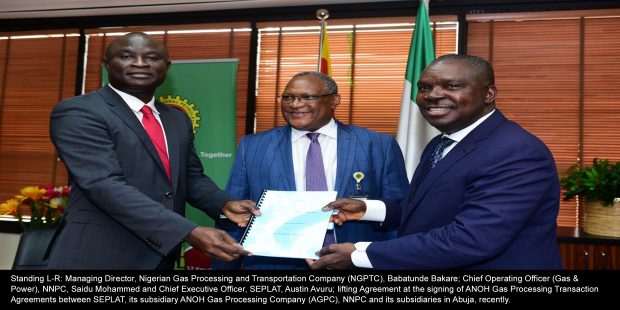 The London listed company signed, together with the Nigerian National Petroleum Corporation (NNPC) and other related companies, the Shareholder Agreement and other Commercial Agreements for ANOH Gas Processing Company (AGPC) project on  Monday, 13th August 2018, at the NNPC Towers, in Abuja, the country’s Federal Capital.

The AGPC incorporated joint venture, in which Seplat and NGPTC hold 35% each, is the midstream company that Seplat has always talked about. Patterned after the NLNG, in which NNPC, Shell, TOTAL and ENI hold equity, AGPC will buy natural gas from the upstream JV: the NNPC/Seplat JV in Oil Mining Lease (OML) 53, and process and deliver both dry gas and several products to customers in the domestic market.

“The execution of these Agreements is an important precursor to the Final Investment Decision (FID) for the ANOH project”, Seplat says in a release.

There are other conditions precedent to the FID, of course, and the timeliness of the completion of plant and inauguration project all of the depend on these conditions, but the agreements signed on Monday, especially the completion of incorporation of the AGPC incorporated Joint Venture, have been collectively close to 12 months in the making.

AGPC is being promoted by the NNPC and Seplat to develop, build, operate and maintain the Company “as a world class Organization delivering on its objectives”, the NNPC said at the event. Seplat, on its part, explained that the ANOH Gas Processing Plant is a milestone project which aligns with the gas infrastructure development initiative of the Federal Government of Nigeria.

The company assures that the AGPC would deliver the project on schedule within the next eighteen months and achieve its objective of being a major gas supplier to the domestic market.

The Agreements signed were: