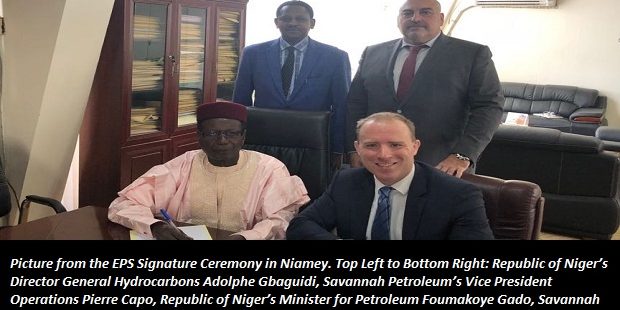 Savannah Petroleum has signed “a legally binding Memorandum of Understanding” with the Government of the Republic of Niger.

The MOU affirms both Parties’ commitment to the realisation of a proposed early production scheme (“EPS”) utilising crude oil resources associated with Savannah’s recent discoveries in the R3 portion of the R3/R4 Production Sharing Contract area in the Agadem Rift Basin (“ARB”) of South East Niger. The MOU further binds both parties to work together towards the realisation of the EPS and contains specific provisions relating to the actions each Party undertakes to conduct as well as setting out the key timelines associated with the project.

The EPS is intended to be domestic focused, with oil produced from Savannah Niger’s R3 area discoveries expected to be sold at the Société de Raffinage de Zinder (“SORAZ”) refinery, which is connected to the ARB via the third party owned 463km Agadem-Zinder crude oil transportation pipeline.

As part of the MOU, the Republic of Niger has confirmed its intention to, inter alia:
• Facilitate the conclusion of a crude oil marketing agreement between Savannah Niger, the local subsidiary of Savannah Petroleum and SORAZ.
• Facilitate the conclusion of an infrastructure access agreement between Savannah Niger and the owner of third party crude oil processing and transportation infrastructure, subject to confirmation of the compatibility of the proposed crude oil Savannah Niger intends to include in the EPS and those crude oils currently being processed and transported though this infrastructure (to be confirmed following Savannah’s planned well testing programme).

As part of the MOU, Savannah has undertaken to, inter alia:
• Submit a pre-feasibility study to the Republic of Niger within 90 days of the signature of the MOU in relation to the discovered crude oil resources in the R3 area anticipated to be included in the EPS;
• Submit an application to the Republic of Niger for the issuance of an Exclusive Exploitation Authorisation within 90 days of finalisation of commercial documentation between Savannah Niger, SORAZ and the third-party infrastructure owner.

Savannah intends to announce further details in relation to the EPS and the Company’s planned well testing campaign in due course.

Foumakoye Gado, Niger Minister of Energy and Petroleum, said:
“We are very pleased with the success Savannah has achieved in its exploration drilling campaign to date, with three discoveries from its first three wells. As a Government, we are keen to see that these and future discoveries commence production as soon as possible, given the positive contribution to economic growth, tax revenues and our local communities that they have the potential to deliver. We are committed to provide Savannah with all reasonable assistance to enable this to happen. We continue to hope that Savannah’s experiences will serve as a positive advertisement for our Government’s pro-FDI approach and would strongly encourage others to come and invest in Niger, both in oil and gas and other sectors.”

Andrew Knott, CEO of Savannah Petroleum, said:
“Our Niger project team is highly focused around the delivery of: (1) near-term production and cashflows from existing and future discoveries in the R3 area; and (2) further material reserve adds through our ongoing exploration and appraisal drilling program. The signature of the MOU provides a clear pathway in relation to our first objective and is a major milestone. In relation to the second objective, Savannah benefits from the large bank of drill-ready exploration prospects that our technical team has mapped within our PSC areas.

We believe the vast majority of these prospects have similar risk profiles to the ones we have already successfully drilled, and we therefore look forward with confidence to the results of the wells still to come in the campaign. It is an exciting period for Savannah and our stakeholders and I look forward to providing further updates as our Niger project progresses over the course of the coming months.

I would like to again thank the Government of Niger for their continued support of our project. We look forward to working with them and our other project stakeholders to making the EPS a reality and starting production and sales from our R3 licence in Niger.

I also look forward with confidence to the completion of the Seven Energy transaction this quarter, and expect to provide further announcements in relation to this shortly.”