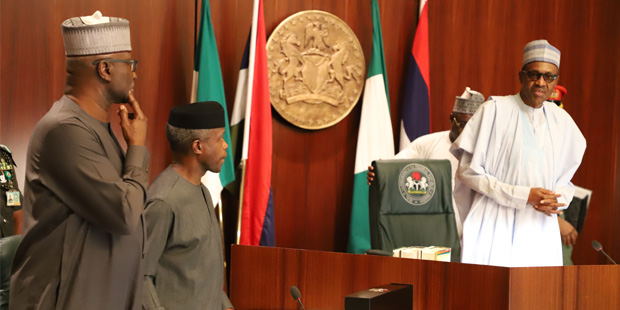 The recommendations to President Muhammadu Buhari to decline Assent to the Petroleum Industry Governance Bill did not come from the Ministry of Petroleum Resources.

As of the morning of Sunday, 2, September 2018, three clear days since the Reuters story broke, Ministry officials themselves were still unaware of the full content of the letter addressed to the Senate and House of Representatives by Mr. President, in which he communicated decline of Assent to the Petroleum Industry Governance Bill, 2018.

What is clear is that the President himself either unilaterally took the decision, or was persuaded by the very close members of his circuit in the Villa, as the residence and office of the Nigerian President is called.

A cross section of industry stakeholders and observers are comforted by the fact that excerpts from the one month old letter of decline to Assent, published by Senator Ita   Enang, Presidential liaison to the National Assembly, do not suggest any fundamental argument against the structure of the Bill itself. “The letter does not seem to say that the NNPC should not be unbundled, that the Minister’s powers should not be whittled down and that an independent regulatory commission should not be created”, enthuses a very impeccable source that has been close to the Bill for the past three years. “What the communication seems to be saying is that we should tweak the legislation here and there”.

Senator Enang himself declares “None of the reasons for withholding Assent by Mr. President adduced by the media is true”, in clear reference to the Reuters’ report, which said that President Buhari withheld Assent because the Bill whittles down the Powers of the Minister.

Enang then states, in deference to the National Assembly, “very limited of the rationale communicated to the legislature, to wit: a) That the provision of the Bill permitting the Petroleum Regulatory commission to retain as much as 10% of the revenue generated unduly increases the funds accruing to the Petroleum Regulatory commission to the detriment of the revenue available to the Federal, States, Federal capital Territory and Local governments in the country. b) Expanding the scope of Petroleum equalisation fund and some provisions in divergence from this administration’s policy and indeed conflicting provisions on independent petroleum equalisation fund. c) Some legislative drafting concerns which, if Assented to in the form presented will create ambiguity and conflict in interpretation. d) Other issues therein contained.”