NLNG Recorded Its Highest Output of All Time in 2017 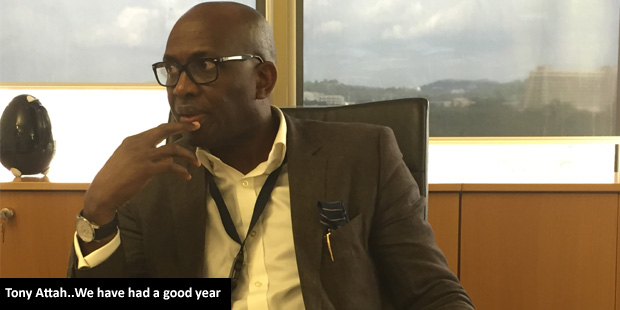 The highest production that the Nigeria Liquefied Natural Gas (NLNG) Ltd has delivered to the market in one calendar year is 21Million Tonnes (21MMTPA) and that was achieved in 2017.

“From a production stand point, 2017 was our best year. That was the year that we produced the highest volume ever and we delivered 21Million Tonnes and slightly more”, Tony Attah, NLNG’s Chief Executive Officer, told Africa Oil+Gas Report. “That was the record year for us as the highest volume that the NLNG has ever delivered to the market in a calendar year”.

The NLNG’s six trains can collectively deliver 22Million Tonnes in a year, which means that 22MMTPA is the nameplate capacity.

“You start looking at name plate capacity versus what we are actually delivering”, Attah, who is in his second year on the job, told us in an exclusive interview. “I think overall, we are optimizing all the bottle necks in the plant to be able to do more. Today, we are really around what is re-rating to 66,000 Tonnes per day capacity plant. We are improving within our capacity in terms of operational flexibility and possibility to keep pushing the envelope”, he explained.

Although 22MMTPA has been the nameplate capacity since the installation of Train 6 in 2008, several challenges, including gas supply adequacy,  sabotage of supply facilities, even logistics issues such as the company’s 2015/2016 face-off with the Nigerian Maritime Administration and Safety Agency (NIMASA), all have acted as downward pressure on optimum output.

The NLNG Ltd, incorporated in 1989, commissioned production in 1999, with the first train having a nameplate capacity of 3.2MMTPA. The base project, Trains 1 and 2 collectively have the capacity to deliver 6.4MMTPA. Train 3 is another 3.2MMTPA plant. Trains 4, 5 and 6 have capacities of 4.1 MMTPA each. The proposed Train 7 will be twice the size of the largest of these six trains.

The full interview is published in the October 2018 issue of the Africa Oil+Report, which focuses on Africa’s Midstream projects and the continent’s Refining Gap.