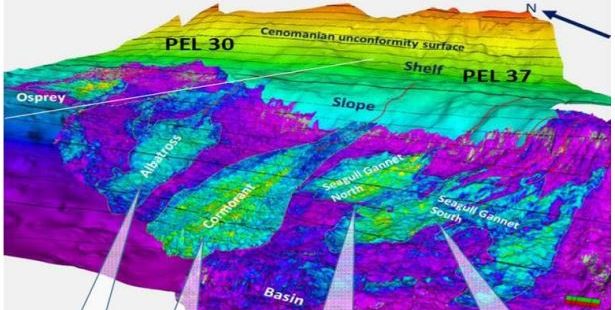 Tullow Oil has spud  the Cormorant-1 well on Petroleum Exploration License 37 (PEL 37) in the Walvis Basin offshore the Republic of Namibia.

The well is located in 545 metres of water and is expected to be drilled by the Ocean Rig Poseidon drillship to a total depth of 3,830 metres subsea.  Cormorant-1 will test the oil potential in a mid-Cretaceous aged deep marine fan sandstone system. Drilling and evaluation of the well is expected to take approximately 34 days.

Cormorant-1 is the first well to be drilled in Namibia in the current post –low price era and is also the first probe since Wingat-1 and Murombe-1 (both drilled in 2013) in PEL 23, located directly south of PEL 37 “confirmed” the presence of mature, oil-prone source rock in the Walvis Basin. It is thus the first well to test the validity of the industry-wide claims about Wingat and Murombe.

The Cormorant Prospect was defined utilizing a high-quality 3D seismic survey acquired in 2014 and is one of four similar submarine fan prospects on PEL 37. The Cormorant Prospect has gross best estimate prospective resources of 124Million barrels and, if successful, is expected to open a fairway of similar dependent fans with substantial resource potential across PEL 37, according to geoscientists at African Energy, a minority partner in PEL 37.