Oilserv In Bed with GEPetrol 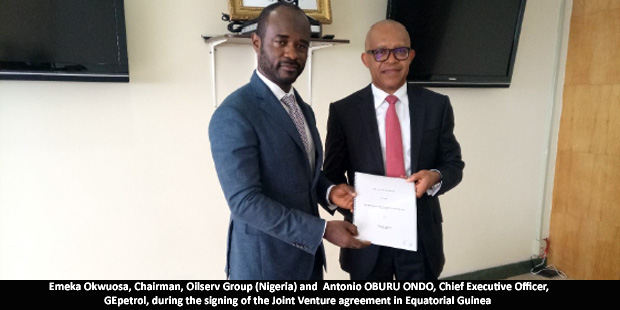 by getting into a joint venture with GEpetrol, the state hydrocarbon company of Equatorial Guinea.

The agreement between the two, signed in early July 2018, has resulted in the formation of OILSERV EQUATORIAL GUINEA S.L.

“The Joint Venture Partnership is a collective strategic thinking aimed at driving inbound investment into the Equatorial Guinea Oil/Gas landscape and to develop the necessary local technical capacity to support the investment aimed at repositioning the national economy”, the two companies say in a press release. “In this new collaboration, Oilserv brings its vast years of technical experience and successful delivery of projects to replicate its achievements in Equatorial Guinea oil and gas industry in partnership with GEpetrol”.

Oilserv is the most visible hydrocarbon pipeline installation firm in Nigeria; its order book is the key guide to the most important crude oil or natural gas pipeline construction is going on in Nigeria. Currently it is constructing half of the OB3 pipeline, the 48 inch, 67km line that is scheduled to be the nerve of the country’s imminent gas grid.

The company has however, been keen on expanding its footprints all over the African continent. It is involved in negotiations with the Ugandan government over a gas pipeline from the hydrocarbon rich town of Hoima to Kanugu, site of a proposed Iron and Steel factory. Its subsidiary, Frazimex, once took a position in Sierra Leone, as an E&P operator.

But to have formed a Joint Venture company with Equatorial Guinea’s state hydrocarbon firm is big deal.

There are no details on the project that the Joint Venture will start with, but GEpetrol’s credentials provide a clue: the company manages the Equatorial Guinea State’s participation in petroleum contracts, markets the State’s share of production and participates in oil service activities. In the midstream area, GEpetrol is a partner in the Equatorial Guinea Liquified Natural Gas Company and in other ventures, So that’s a clue: Equatorial Guinea has just created a hub for natural gas supplies, which will, in the first instance, introduce third party gas into the Punto Europa complex that was, until now, only supplied with gas from Marathon Oil operated Alba field. If the Equatorial Guinea government is thinking of pipeline to supply gas into that complex from any field that is some distance away, then Oilserv has the capacity to do it.

‘’I am delighted to welcome yet another global brand to GEpetrol, especially a respected and recognized name in the Nigerian Oil and Gas industry”, says Antonio OBURU ONDO, Chief Executive of GePetrol. “This new partnership is a testament of the government continuous efforts in encouraging private sector participation with greater economic liberalization policies and the creation of favourable investment climate and enabling framework”.