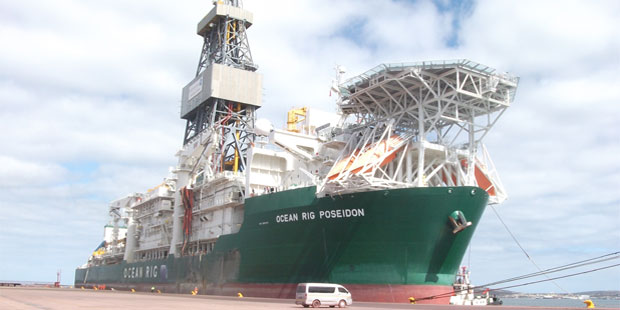 Chariot Oil and Gas , a London listed minnow, announced the deployment of the Ocean Rig Poseidon to spud the Prospect S well in the Central Blocks licence offshore Namibia, less than a week after Tullow Oil  went to town with the results of Cormorant-1 as a dry hole.

12 days later, the probe was announced a duster.
The well had been safely drilled to a total measured depth (MD) of 4,165 m to test the stacked targets in Prospect S. It penetrated the anticipated turbidite reservoir sands, in line with the pre-drill prognosis, however the reservoirs were water-bearing. “The data collected will be used to calibrate the existing data sets to understand the implications of the well results on the prospectivity of the surrounding area.”
The operator was in the process of plugging and abandoning the well as we went to press in early October 2018.

The structure on which the Prospect S was drilled is one of five dip-closed structural traps, totalling 1,758MMBbls gross mean prospective resources, which have been identified in the Upper Cretaceous turbidite clastic play fairway. The company had talked of a probability of geologic success of 29%, citing a Competent Persons Report by Netherland Sewell Associated Inc.

“A further two higher risk-reward, stratigraphic traps, totalling 885MMBbls gross mean prospective resources”,  was to have been de-risked through the calibration of the 6,100km2 of proprietary 3D seismic data on the Central Blocks with the result of the Prospect S well. All that did not happen.

« For Ororo 2, Sirius Will Take Adriatic 1, from Amni
TOTAL’s Cape of Storms Well For Re-entry in December 2018 »