Three In One Quality Marks Out NigerStar 7ADABA 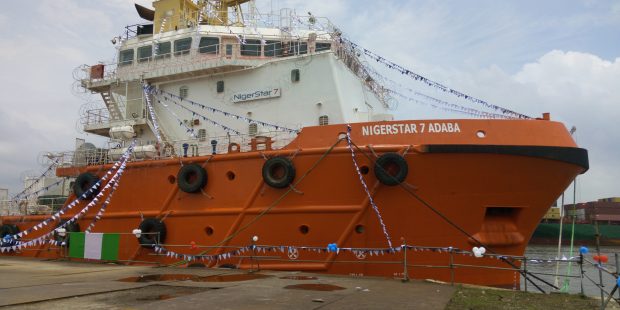 The NigerStar7 ADABA, a recently acquired vessel by NigerStar7, was unveiled at a ren

aming ceremony  held at the NigerDock facility, its first port of call on the 20th of September 2018. NigerStar7 is a Nigerian joint venture company formed by the Jagal Group and SubSea7, an offshore pipeline-laying and subsea infrastructure deployment organisation that had previously operated, exited and re-entered the Nigerian oil service industry.

NigerStar7 ADABA is described by Yann Cottart, CEO of NigerStar7, as “an Anchor Handling Tug and Supply vessel that is wholly-owned and flagged as a Nigerian ocean-going vessel entirely manned by a Nigerian crew of 14 persons”. This tripartite quality, Mr. Cottart, explains, ”makes it a first in the Nigerian offshore service industry”. Cottart claims that the vessel is “the most powerful anchor handling tug operating in Nigeria presently with a bollard pull of 140 tons. It can tow rigs and large-capacity supply vessels, retrieving and deploying anchor in deep offshore environment.” Mr, Cottart allows that the tugboat is “permanently imported and equity-financed through international lending of $10Million  in direct investment into the country. Ancillary services will add further $10Million in the next five years

Built in 2008, the Dynamically Positioned (DP2) vessel measures 70metres in length, summer draft of 6.1metres, deadweight of 2114.74metric tonne, gross tonnage of 2,705metric tonne, lightship of 2,539.51metric tonne, with applicable fire-fighting capability for both offshore and portside fires. The deck space measures 462square metres. It has a 52-bunk capacity, 14 crew members inclusive”. This tug has two Operation stations OS1 and OS2 equipped with three individual 680 kilowatt thrusters, two at the Bow, the third at the Stern. The thrusters allow the DP2 vessel to operate and switch stations without changing positions. A 2.2 metric tonne telescopic boom crane sits mid-ship the vessel. The vessel comes equipped with Electronic Fuel Monitoring System.” He further stated safety, integrity, innovation and performance as the bedrock of the NigeStar7 brand which aims to compete internationally.

For a vessel that has been operational a decade in, won’t its servitude time in Nigeria ebb quicker? “Not so!”, states Maher Jarmakani, Group CEO of the Jagal Group, one-half of the joint venture partnership- NigerStar7. “It’s not uncommon for vessels this kind to run a 25-year lifespan and still be useful”. With two jobs at hand, first-off the Erha Field onwards to Qua Iboe Terminal, both ExxonMobil facilities, the NigerStar7 ADABA has started off her Nigerian service life running. Port/Yard dockings during off-peak periods will largely be determined by economical factors of costs and benefits.

This is a sponsored article.