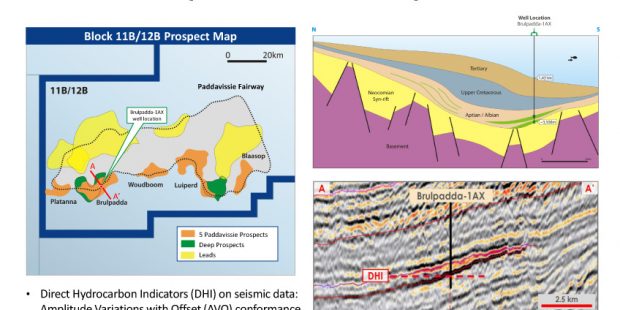 ….only exploratory probe by a major oil company in South Africa in the last 25 years.

TOTAL’s re-entry of the Brulpadda-1AX well on Block 11B/12B, offshore South Africa, is expected to spud by the end of December 2018.

The Odfjell Deepsea Stavanger semi-submersible rig has been mobilized from the North Sea and is expected to arrive in South Africa in mid to late December 2018. The Brulpadda prospect, at a water depth of 1,431 metres, was defined on two dimensional (2D) seismic data and is one of five submarine fan prospects with large prospective resources on the block. The well will test the southern Outeniqua Basin within the Paddavissie Turbidite Fan Complex.

This is the only exploratory probe by a major oil company in South Africa in the last 25 years.

TOTAL’s original contract with the rig company was expected to run between June 2018 and April 2019. The contract value, including compensation for mobilization /demobilization period, is estimated up to $55Million. The company expects the drilling of the firm well to take 60-80 days.

TOTAL stopped drilling the Brulpadda-1AX well in September 2014 because of mechanical problems on Eirik Raude Ocean rig, caused by the challenging environment in the Agulhas, with its chaotic combination of currents, waves and winds. The company said it would return to site the following year, in late 2015. But by then the world of oil had dramatically changed from what it was in 2014 and far flung frontiers like ultradeepwater South Africa dropped off the priority. In late 2016, TOTAL spokespersons affirmed that the company would return to drill in South Africa in 2017. “There’s only a small window in the year that we can drill in this part of the continent”, a ranking TOTAL earth science executive told Africa Oil+Gas Report at the time.  “The place is quite turbulent.” The 2017 date didn’t happen.