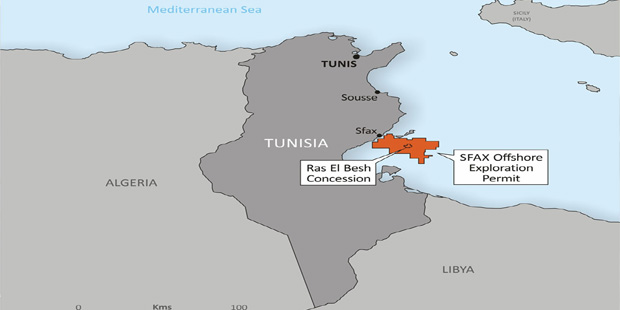 Panoro Energy has announced a Heads of Terms agreement with Compagnie Tunisienne de Forage (CTF), the Tunisian state-owned drilling contractor, for the use of the CTF-4, a 2,000-horsepower onshore rig, or equivalent drilling rig, for the drilling of the Salloum West-1 well (SAMW-1) located in the Sfax Offshore Exploration Permit (SOEP). The spud date of the SAMW-1 well is anticipated to be in the first half of 2019 and is subject to the entry into a second renewal period of the SOEP for a period of 3 years, and the subsequent approval of the final drilling program and budget by ETAP. Advanced discussions for the renewal are ongoing with the Tunisian Authorities.

The announcement to spud the SAMW-1 well, to be directionally drilled from the shore as a deviated well, comes only 3 months after the closing of the acquisition of DNO Tunisia AS.

The primary objective of the SAMW-1 well is the Bireno formation, at approximately 3,200 metres vertical depth, where the Company has identified, based on 2D and 3D seismic data, what it believes to be an extension of the Salloum structure to the west. The SAMW-1 well will target an independent fault compartment up-dip from the Salloum-1 well which was drilled by British Gas in 1992 and tested the Bireno formation at a rate of 1,846 bopd.

The objective of the SAMW-1 well is to prove up additional resources in the vicinity of the Salloum-1 well and subsequently fast-track the development of Salloum through a tie-in to existing adjacent oil infrastructure.

The decision to drill this new well is supported by rig availability, cost-savings due to drilling equipment for the well already being owned and stored in Panoro’s Sfax warehouse, existing 2D and 3D seismic covering the SAMW-1 location, close proximity to the Salloum-1 discovery well, the existing adjacent oil infrastructure, and a high chance of success.

The expenditure on SAMW-1 well will be funded from Panoro’s existing financial resources. The well costs will also be an added to the existing substantial cost pool of SOEP which will be fully recoverable against future revenues through crude oil sales.