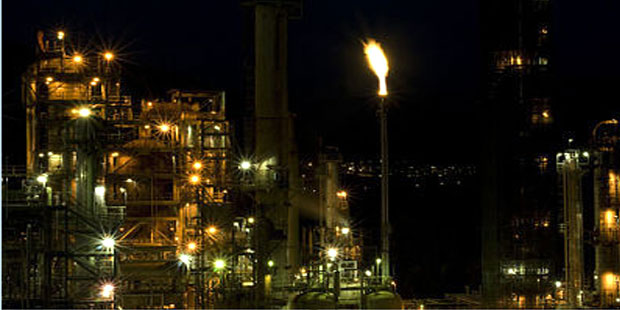 The project may be controversial because arguments for a new refinery are not conclusive, and SA has a poor record in bringing mega projects on stream on time and on budget.

SA’s six privately-owned refineries have been largely in limbo for the last few years. Most are 50 years old or more and in need of substantial investment to enable them to meet the latest standards for petrol and diesel for new-model vehicles, or most will be closed in the next few years.

In 2012 SA introduced new regulations, called Clean Fuels II, to enforce the Euro V standard for fuels by mid-2017. But the effective date has been postponed while government and oil companies are at odds over how the refineries will be able to recover the costs (in a regulated fuel price environment) for making the necessary upgrades.

In the interim, the refined product needed for the latest model vehicles is being imported.

In August, Bloomberg reported Sasol, which owns a plant at Secunda making about 150,000 barrels a day of fuel from coal and gas, and a 63.64% stake in the Natref refinery with a capacity of 108,000BOPD in partnership with Total, was considering selling its Natref stake, amongst other options. CEO Bongani Nqwababa said Sasol had “found a relatively affordable way forward” on clean fuels for Secunda but Natref “is a more difficult case”.

Natref, which was commissioned in 1971, was last upgraded about twenty years ago. Apart from Natref and Sasol’s Secunda plant, SA’s other refineries are Chevron (100,000BOPD), Engen/Petronas (135,000BOPD), Sapref (owned by Shell/BP) (180,000bbl/day) and the government-owned PetroSA refinery at Mossel Bay, which converts gas to fuel (45,000BOPD).

The global trend, noted by EY in its 2018 Global Divestment study on oil and gas, is for oil multinationals to divest mature or late-stage assets. South Africa saw this last year when Chevron agreed to sell its Caltex-branded fuel stations and refinery to Sinopec. That sale foundered on the resistance of Chevron’s local shareholders, who instead partnered with global commodities giant Glencore.

In August, the country’s Competition Commission recommended the Glencore/Off The Shelf purchase of Chevron’s assets, with certain conditions including “commitment to a significant investment being made to deal with refinery capacity and related matters.”

Three years ago Petronas was reported to be trying to sell its 80% stake in Engen to PetroSA, another deal that fell through partly because of PetroSA’s precarious financial position.

Other oil multinationals might find it difficult to divest from SA because flat fuel sales render their petrol forecourts unattractive and the cost of refinery upgrades or closures presents a substantial capital commitment for the future.

Government and the oil companies have remained tight-lipped on the shape of an agreement on the refinery upgrades. With SA’s pump prices at record highs on the back of higher oil prices and a weak currency, and consumers recently having to swallow a 1% hike in the VAT rate, government has little room to manoeuvre on adding more taxes to the fuel price. 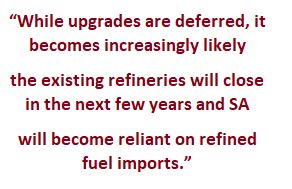 While upgrades are deferred, it becomes increasingly likely the existing refineries will close in the next few years and SA will become reliant on refined fuel imports. It currently imports about a quarter of its petroleum products. Consumption of both petrol and diesel has exceeded supply for the past decade, according to the department of energy’s “Overview of the Petrol and Diesel Market in SA 2007-2016”.

Project Mthombo would ensure SA retains refining capacity. Each of SA’s last three energy ministers has talked enthusiastically about it. They say it is needed to secure the country’s energy supply and preserve refinery jobs.

Although originally mooted as a project partnership with Sinopec with the local Industrial Development Corporation as funding partner, Sinopec’s defeat on the Chevron deal may alter these plans. Clearly Mthombo would need substantial foreign funding – it would cost at least $7bn, based on an estimated cost of $25,000 per barrel of capacity.

But there are many critics of Mthombo.

SA does not have the cost advantage of being a crude oil producer. It may have some offshore oil, but that is unproven. According to a March 2010 World Bank study, “Petroleum Markets in Sub-Saharan Africa”, for countries with no domestic oil, “it is not clear that importing and refining crude oil enhances supply security any more than importing refined products.”

Refineries are not big employers. The World Bank study cited Valero, the largest refiner in the US, which employed an average of only 510 workers at each 200,000BOPD refinery.

AT Kearney said in a recent paper: “Refining 2021: who will be in the game?” that “Asia Pacific is the region with the highest activity in terms of numbers of refineries opened and closed, even as small, polluting, and less efficient refineries are being closed and world-scale state-of-the-art facilities are coming on line.

“In this highly attractive market, international oil majors are becoming much more involved in joint ventures to build petrochemical plants, attracted by relatively high economic growth in many countries.”

In principle, the South African government could try to find foreign partners for Mthombo. But unfortunately the country does not offer the high economic growth rates that AT Kearney is referring to. Its second quarter GDP growth was a negative 0.7% and the highest growth rate it has achieved in the last eight years was 3.3% in 2011.

SA’s weak growth rate and joblessness would benefit in the short term from a substantial infrastructure project funded by foreign investment. But a new refinery has long term consequences. It cannot be a purely political decision. The economic argument for it must be sound.

Charlotte Matthews is a former Energy Editor at the Financial Mail of South Africa. She wrote this piece specifically for Africa Oil+Gas Report.