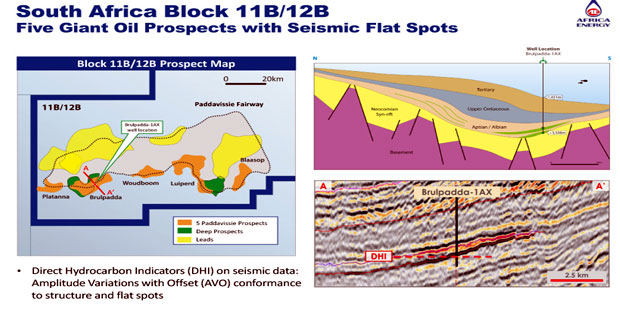 The company will thus partner with French major TOTAL, Qatar Petroleum and Canadian Natural Resources to, among other things, spud the Brulpadda-1AX well, scheduled for late December 2018

Block 11B/12B is located in the Outeniqua Basin approximately 175 kilometers off the southern coast of South Africa. The block covers an area of 18,734 square kilometers with water depths ranging from 200 to 2,000 meters.  After closing, Total, as operator, will have a 45% interest in Block 11B/12B, while Qatar Petroleum and CNRI will have 25% and 20% interests, respectively.

The Brulpadda-1AX exploration well will be drilled in 1,432 meters of water by the Odfjell Deepsea Stavanger semi-submersible rig to a total depth of 3,420 meters subsea. The well will test the oil potential in a mid-Cretaceous aged deep marine fan sandstone system within stratigraphic closure. Drilling and evaluation of the well is expected to take approximately 85 days