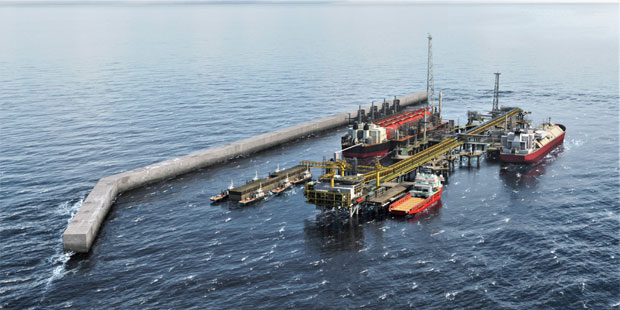 BP has announced the agreement, with its partners, for Final Investment Decision (FID) for Phase 1 of a Floating LNG project in two fields straddling Senegal and Mauritania.

It will be the third floating LNG plant offshore Africa, coming after the Perenco operated  2.4MMTPA Hilli Episeyo FLNG, located  on the Atlantic offshore Cameroon, which came on stream last June and the ENI operated 3.3MMTPA Coral South FLNG, to be sited on the Indian Ocean offshore Mozambique. Construction of the Coral South Vessel has begun.

The FID for BP operated Greater Tortue Ahmeyim development was made following agreement between the Mauritanian and Senegalese governments and partners BP, Kosmos Energy and National Oil Companies Petrosen and SMHPM.

The project will produce gas from an ultra-deepwater subsea system and mid-water floating production, storage and offloading (FPSO) vessel, which will process the gas, removing heavier hydrocarbon components. The gas will then be transferred to a floating liquefied natural gas (FLNG) facility at an innovative nearshore hub located on the Mauritania and Senegal maritime border. The FLNG facility is designed to provide circa 2.5Million tonnes of LNG per annum on average, with the total gas resources in the field estimated to be around 15Trillion cubic feet. The project, the first major gas project to reach FID in the basin, is planned to provide LNG for global export as well as making gas available for domestic use in both Mauritania and Senegal.

The parties will continue to finalise agreements and obtain final regulatory and contract approvals, following which Phase 1 of the development will move into a detailed design and construction phase, with award of engineering, procurement, construction and installation (EPCI) contracts.  Project execution activities are expected to commence in 1Q 2019. First gas for the project is expected in 2022. Following a competitive process involving all partners, BP Gas Marketing has been selected as the sole buyer for the investor partners’ LNG offtake for Tortue Phase 1.