TOTAL looks to Final Investment Decision on Preowei in 2019 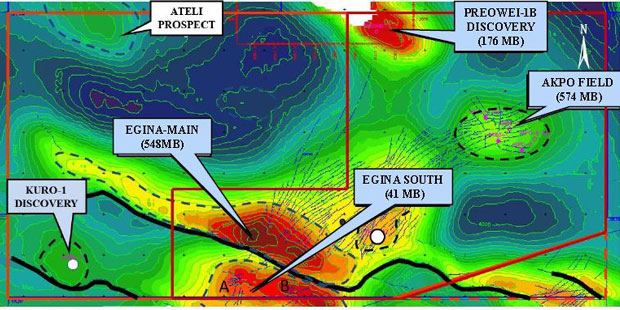 By Moses Akin Aremu, in Uyo

TOTAL is working up the Preowei structure in the vicinity of the Egina Field, which is about fully coming on stream sometime this week.

The Preowei accumulation, located north eastwards, was discovered in 2005.

“A great upside potential nearby (Egina) still needs to be developed and we are studying in particular Preowei discovery tie-back to the Egina FPSO,” TOTAL officials say. “An investment decision is scheduled for 2019”, they add,

Preowei is expected to produce around 70,000BOEPD at peak. The field will be developed as a tie back to the Egina FPSO, the largest deepwater floater that TOTAL ever deployed.

The aggressive French major began to talk up the possibility of producing Preowei in December 2017 when, after drilling Preowei-3, it reported an addition of approximately 80 to 100 Million barrels of oil (MMbo) to the full field contingent recoverable resources, bringing them to 140 to 200MMbo.

The Preowei-3 well, drilled to a final depth of 3,235 meters, encountered approximately 50 metres net of high-quality oil-bearing sandstone reservoirs, in line with expectations. The well confirmed previous results from the Preowei-1B and Preowei-2 wells, which encountered approximately 55 metres of oil-bearing sandstone reservoir.

The company is paying close attention to bottomline. “Egina will significantly boost the Group’s production and cash flow from 2019 onwards, and benefit from our strong cost reduction efforts in Nigeria where we have reduced our operating costs by 40% over the last four years,” a company statement says.