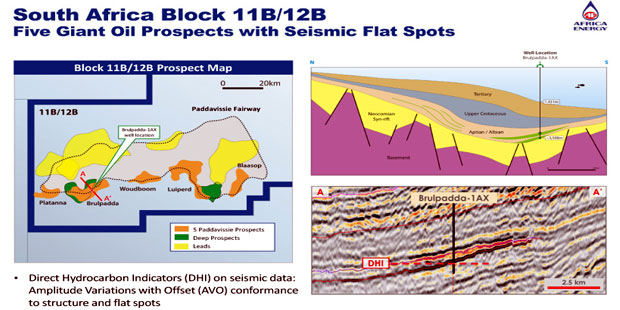 Four years after it was forced to quit, TOTAL has re-entered the Brulpadda-1AX on Block 11B/12B offshore South Africa.

The French major looks forward to drilling results, in what it considers a “basin-opening opportunity”, in the first quarter of 2019.

TOTAL halted drilling of the well in November 2014 because of mechanical problems on the rig, caused by the challenging environment in the Agulhas, with its chaotic combination of currents, waves and winds, which contrasts sharply with the mild metocean conditions of the West African deepwater.

Block 11B/12B is located in the Outeniqua Basin, approximately 175 kilometers off the southern coast of South Africa. The area has a proven petroleum system from the nearby Sable and Oryx oil fields, according to geoscientists working on the prospect. Brulpadda is one of five similar submarine fan prospects with direct hydrocarbon indicators defined utilizing two dimensional (2D) seismic surveys acquired across the Paddavissie Fairway in 2001 and 2005. The Brulpadda Prospect has gross prospective resources of more than 500Million barrels with significant follow-on potential in the success case.

TOTAL is drilling in South Africa at a time of significant uncertainty around oil and gas exploration in the country, with an Upstream Petroleum law stuck in parliament over 10 years with no clear line of sight to resolution. But if the well turns out to be a discovery in an otherwise barren landscape, it has the tendency to kickstart a drilling queue.

Brulpadda-1AX is being drilled in 1,432 metres of water by the Odfjell Deepsea Stavanger semi-submersible rig to a total depth of 3,420 meters subsea. The well will test the oil potential in a mid-Cretaceous aged deep marine fan sandstone system within combined stratigraphic/structural closure. Drilling and evaluation of the well is expected to take approximately 85 days with a gross budget of approximately US$154 million, including contingency for downtime due to weather.

TOTAL operates Block 11B/12B with a 45% interest in Block 11B/12B, while Qatar Petroleum and Canadian Natural Resources Limited have 25% and 20% interests, respectively.