Why Senegal Can’t Be the Next Ghana 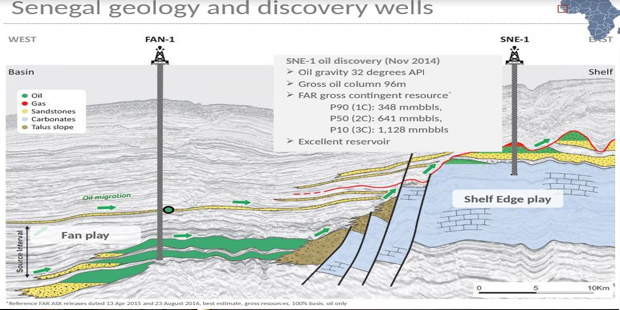 When Cairn Energy encountered the SNE field in deep-water offshore Senegal in 2014, it was hailed,in the energy press, as one of the largest oil discoveries anywhere in the world in that year.

The discovery opened, farther, the North West African segment of the Transform Margin, and spurred a renewed rush for acreage acquisitions in the Mauritania-Senegal-Guinea-Bissau Basin, in a way that could be compared to how Ghana’s Mahogany discovery, seven years earlier, animated conversations around the West Africa Transform Margin.

But Ghana’s Mahogany discovery, which became the basis for the Jubilee field development,reached the market in the space of three years after the find. The Jubilee Phase 1 development was approved in July 2009 and the field came on stream in the Christmas of 2010, targeting 120,000BOPD at peak.

Conversely, in the fifth year of its discovery, the SNE field is yet to reach Final Investment Decision.

For one, Ghana’s oil discovery was made as the price of crude oil was about to take off to stratospheric highs. The Senegalese find came as prices were plunging.

Kosmos Energy, the finders of Mahogany-1, encountered a robust structure in deep water which,with Heydua-1 discovery (by Tullow Oil) several months later, was a straddle play that was the kind of hub structure they could develop rapidly.

Cairn, on the other hand, needed a string of appraisal wells to convince itself it could declarecommerciality of the SNE structure and construct a field development plan.

So the delays in development are as much a question of geology as they are about crude oil price regime and overall bankability.

Read the full article, here, in the January 2019 edition of the Africa Oil +Gas Report

« TOTAL Shoots Towards >400,000BOPD in Angola’s Block 17
In Northwest Africa, You Don’t Always Get What is Promised »