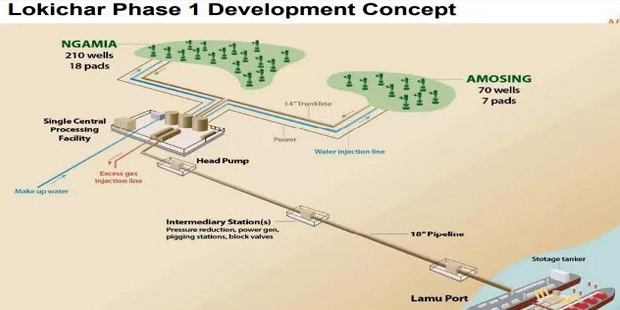 The Kenyan government has published a gazette giving notice to land owners along the right of way of the planned crude oil export pipeline to the coast of Lamu.

The action is the latest in the series of actions leading up to final sanction of a 140,000Barrels of Oil Per Day oilfield development project, expected in late 2019.

A 750km pipeline is to be constructed, starting from oilfields in the South Lokichar Basin in the Turkana Country in the north of Kenya to the port town of Lamu on the Indian Ocean.

The government gazette notice dated Friday, February 8, 2019, stated  that “In pursuance of section 107 (5) and 162 (2) of the Land Act, 2012 the National Land Commission on behalf of the Ministry of Petroleum and Mining, State Department of Petroleum gives notice that the government intends to acquire the land depicted by and falling within the following co-ordinates in Turkana County for upstream development”. The notice said that “Plans depicting the land may be inspected during working hours at the office of the National Land Commission, Ardhi House, Third Floor, Room 305, 1st Ngong Avenue Nairobi. Notice of inquiry will be published in the Kenya Gazette as per section 112(1) of the Land Act, 2012.”

But the notice only indicated the right of way land in the upstream part of the project, i.e, the oilfields involved: Amosing, Ngamia and Twiga oil fields. It says nothing of the rest of the export route.

Crude oil was discovered in commercial quantities for the first time in Kenya in April 2012, by the British oil minor Tullow Oil. The company and its co-venturers TOTAL and Africa Oil, in concert with the Kenyan Government, have contracted  WorleyParsons and Wood Group, to come up with the Front End Engineering and Design (FEED) for the project.  The first phase will involve 60,000 barrels a day of oil and the second phase will add 80,000BOPD.  Project cost may reach $5Billion.