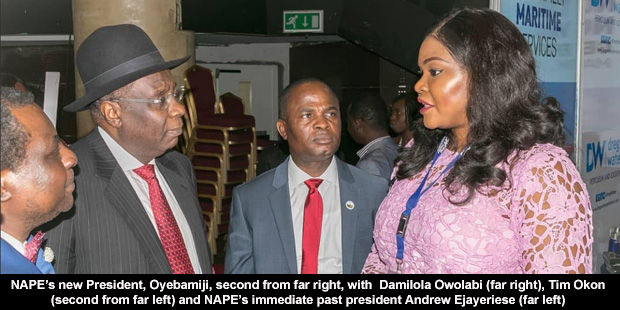 Ajibola Oyebamiji has taken charge as President of the Nigerian Association of Petroleum Explorationists (NAPE), the largest group of technical professionals in the oil industry on the African continent.

He is the 36th President of the 44 year old body

Oyebamiji had been waiting for the position for a whole year. The 50 year old biostratigrapher with ENI, the Italian explorer, was elected President Elect by the 7,000 strong body in November 2017, but as the NAPE constitution goes, the President Elect serves a term of a full year, waiting on the President, all the while running the continuing education structure of the organisation, which includes the monthly technical meetings and the annual, five day conference, the biggest technical-focused oil and gas summit in Nigeria.

Oyebamiji’s daytime job at ENI is largely as representative on the board of the Stratigraphic Committee of the Niger Delta (STRATCOM). He is currently the Chairman of the Biostratigraphic Subcommittee, a consortium of seven (7) IOCs.

Ajibola Oyebamiji obtained a Bachelor of Technology (B.Tech, Hons) degree in Applied Geology from the Federal University of Technology, Akure, (FUTA) in 1991.  He graduated with a Master of Science degree in Micropaleontology, from the University College London, in 1996.

He started his career with Mosunmolu Limited in March 1993, as a Micropaleontologist, where he spent twelve (12) years. He rapidly became the Head of the Micropaleontology unit, in that company, in less than two years, He doubled as the Technical/General Manager of the company before he moved on to ENI.