Tullow Appoints Two Black Women to the Board 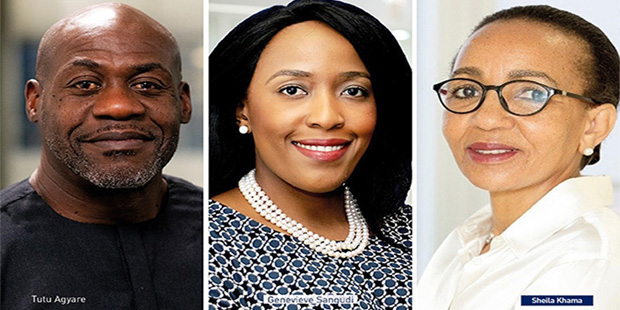 Irish founded, London Listed Tullow Oil, which styles itself as The Largest African Independent, has tweaked the membership of its board of directors, appointing two distinguished Black Women.

Sheila Khama, a policy adviser on the mineral, oil and gas industries at the World Bank and Genevieve Sangudi, Managing Director for The Carlyle Group based in South Africa, will join six white men and a white woman at the company’s Board Meeting on April 26, 2019, following Tullow’s Annual General Meeting (AGM) on 25 April 2019.

It would be exactly a year since Tullow welcomed its first female Chairman of the Board.

Dorothy Thompson, Chief Executive Officer (until the end of 2017), of Drax Group Plc, the international power and energy trading company, has been, for the past year, the only female on Tullow’s eight-person board.

Ms. Khama and Ms. Sangudi join the board as Tutu Agyare, the Ghanaian investment banker and only African on the board, exits after nine years. Mr. Agyare “has provided significant support and insight to Tullow, particularly with regards to Ghana, during his time as a director”, the company says in a release.

Sheila Khama’s job at the World Bank focuses on host government relations with commercial companies. She also represents the bank as an observer on the International Board of the EITI. She had worked in a similar role for three years at the African Development Bank, before taking up the World Bank job in 2016. Khama had earlier spent eight years with Anglo-American in Botswana as their Corporate Secretary before joining De Beers as their CEO in Botswana for five years until 2010.

Genevieve Sangudi has over 15 years of investment experience in Africa in the healthcare, financial services, oil & gas, petrochemicals, agribusiness and telecommunications sectors. She joined Carlyle in 2011 and played a lead role in launching Carlyle’s maiden Sub-Saharan Africa fund, including fundraising, strategy, origination and execution. Prior to joining Carlyle, Genevieve was a Partner and Managing Director with Emerging Capital Partners where she established and managed the firm’s Nigeria operations. Genevieve started her career in business development at Procter & Gamble in Boston.