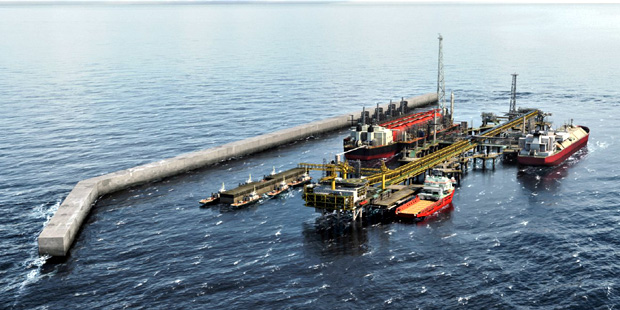 McDermott was awarded a substantial* engineering, procurement, construction and installation (EPCI) SURF contract. “The company “plans to use its upgraded Amazon vessel, DLV 2000, North Ocean 102 (NO 102) and third-party vessels to support installation scheduled to begin in late 2020”, the company says. The Amazon modifications are scheduled to be completed before the installation campaign begins and will include a multi-joint (hex) J-Lay system to handle the most challenging ultra-deepwater projects as well as the addition of a multi-joint facility, dual pipe loading cranes and additional power generation”. McDermott also says that the pipeline and riser structures it designs will be fabricated at its yard in Batam, Indonesia.

BHGE, on its own, declares that it is “demonstrating the benefits of early-engagement and collaboration – some of the key components of Subsea Connect – as well as bringing its expertise in deepwater, long-offset gas projects”. The company will provide five large-bore deepwater horizonal xmas trees (DHXTs), a 6-slot dual bore manifold, a pipeline end manifold, subsea distribution units (SDUs), three subsea isolation valves (SSIVs), diverless connections and subsea production control systems, specifically designed to enable the future integration of additional wells for the first phase of the development.

Tareq Kawash, McDermott’s Senior Vice President for Europe, Africa, Russia and Caspian testifies:  “This contract marks a number of firsts: our first significant subsea EPCI project in West Africa; the first project using our state of the art pipelay vessel Amazon; and our support of BP’s first entry into Senegal and Mauritania. This project is also of significant importance in support of our aspirations in this region,” said. “Our collaboration with BHGE allows us to offer BP an integrated approach that builds on our proven solutions. We look forward, along with BHGE, to deliver this landmark project to BP with the highest levels of safety and quality.”

“Together with McDermott, we will deliver the best-in-class solution to BP with cost-efficiency and industry-leading safety. These awards demonstrate the value of early-engagement, collaborative partnerships and holistic project planning, which are very much central to our new approach to subsea developments, Subsea Connect,” said Graham Gillies, BHGE’s Vice President, Subsea Production Systems & Services. “This major deepwater gas development is strategically important for Mauritania and Senegal’s domestic and global gas supply, and supports the industry’s drive for a more sustainable, lower carbon future.”

BHGE has also signed an agreement to become a “Country Partner” of Invest in Africa’s (IIA) Senegal chapter, of which BP is a founding member. The IIA helps local suppliers to connect with international oil and gas companies, increasing the opportunities for local businesses to support large-scale projects, and training African suppliers on core business skills and entrepreneurship.

Project Details
The initial subsea infrastructure connects the first four of 12 wells consolidated through production pipelines leading to a floating production, storage, and offloading (FPSO) vessel. From here liquids are removed and the export gas is transported via a pipeline to the floating liquid natural gas (FLNG) hub terminal where the gas is liquefied.

* – McDermott defines a substantial contract as between $500 million to $750 million. The contract award will be reflected in McDermott’s first quarter 2019 backlog.