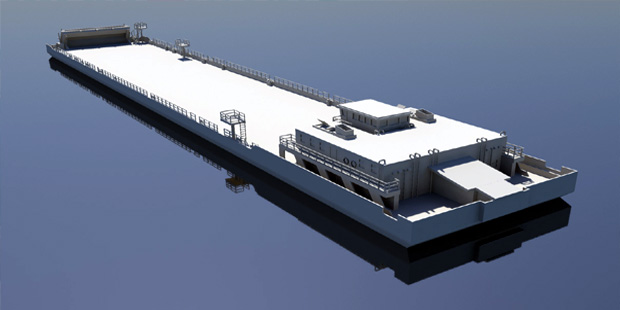 The first steel plate was cut for the construction of an LNG barge vessel at the Southern African Shipyards (SAS) in Durban’s Bayhead several weeks ago.

The 143m long and 34m wide vessel will be the only one of its kind in the world, according to Aldworth  Mbalati, CEO of DNG Energy, the owner of the vessel. It will be christened “DNG Genesis”.

The barge is expected to be completed by the end of 2019. It will have a crew of 40, when it is in operation.

DNG Energy is planning to invest more than $5Billion in creating a Pan African LNG supply network over the next five years, Mr. Mbalati, claims. It is an ambitious plan which will mean work for thousands of people. It would be an 8 000 ton energy barge, the largest vessel by weight ever to be built in Africa, the CEO explains.

The company has a floating storage terminal and the idea is that LNG from exporting countries will be stored at the terminal and then offloaded onto the Durban-made barge which “as the work horse” will operate in Southern Africa waters, transporting energy to customers in South African and the member states of Southern Africa Development Community SADC.

The exact location of the floating storage terminal-which is currently in operations internationally-will only be unveiled at the launch in March 2019, Mbalati said.

One ranking VIP at the steel cutting ceremony was British veteran anti-apartheid campaigner Lord Peter Hain, who is one of DNG Energy’s company’s non-executive directors. Lord Hain is a former British Minister of State for Energy and Competitiveness in Europe.

Mbalati argues that LNG will dramatically improve the economy, reasoning that if SA Inc. stops the large spend on importing refined fuel, the (local currency rand will grow stronger and the country’s GDP will improve.

« Hyundai Heavy Industries, Close To Take Over of Daewoo Shipbuilding
Naval Chiefs To Assemble in Accra For Gulf of Guinea Issues »