TOTAL Ties Up With Oxy For Anadarko’s African Pie 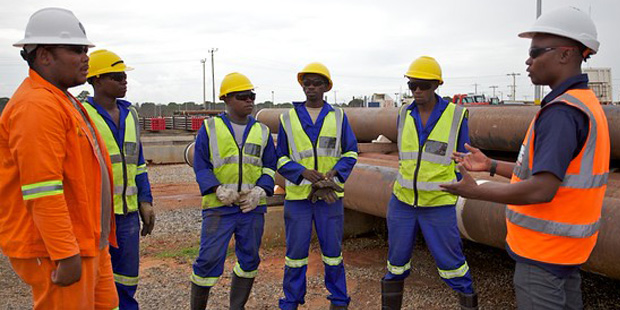 French major TOTAL has reached a binding agreement with American independent Occidental to acquire Anadarko’s assets in Africa (Algeria, Ghana, Mozambique, South Africa) for a consideration of $8.8Billion, in the event of a successful completion of Occidental’s ongoing bid for Anadarko.
The transaction is contingent upon Occidental entering into and completing its proposed acquisition of Anadarko and to approval by the relevant authorities and is expected to close in 2020.

The assets to be acquired are:
•Algeria: 24.5% participating interest and operatorship of blocks 404a and 208 (Hassi Berkine, Ourhoud and El Merk fields) in the Berkine basin in which Total already owns 12.25%. These fields represented a gross production of three hundred and twenty thousand barrels of oil equivalent per day (320KBOEPD) in 2018.

•Ghana: 27% participating interest in the Jubilee field and 19% participating interest in the TEN fields. These fields represented a gross production of 143KBOPD in 2018,
•Mozambique: 26.5% participating interest and operatorship in Area 1 where a 12.8 million tonne per year LNG project is largely derisked and close to sanction. Area 1 contains more than 60 Tcf of gas resources, of which 18 Tcf will be developed with the first two train project which is expected to come into production by 2024,
•South Africa: exploration licences, close to Total’s recent Brulpadda discovery.
“Overall, these assets represent around 1.2BillionBOE of 2P reserves, of which 70% is gas, plus 2BillionBOE of long term natural gas resources in Mozambique. 2018 equity production was 96KBOEPD and is expected to grow to around 160KBOEPD by 2025”, TOTAL says in a release.

“If completed, the acquisition of Anadarko by Occidental offers us the opportunity to acquire a world class portfolio of assets in Africa, further enhancing our position as the leading IOC on the continent. We have said consistently that our M&A activities will add value by playing to our strengths and focussing on upgrading our portfolio. This is exactly what we would do here. We would be able to leverage our expertise in LNG by operating a major project in Mozambique and in Deepwater in Ghana and we would become operator of major Algerian oil assets where we are already a partner. We would also be able to generate value through adding volumes to our growing LNG portfolio where we are already the 2nd largest private player. We have demonstrated the success of this strategy through the recent acquisitions of Maersk Oil.” Patrick Pouyanne, Chairman and CEO commented on the announcement.

“TOTAL is committed to execute smoothly this transaction, should Occidental be successful in its offer to acquire Anadarko. The proposed transaction is a win/win for TOTAL and Occidental. TOTAL would get access to around over 3Billion BOE of resources and Occidental would be able to strengthen its post completion balance sheet by monetising immediately the international assets of Anadarko.”