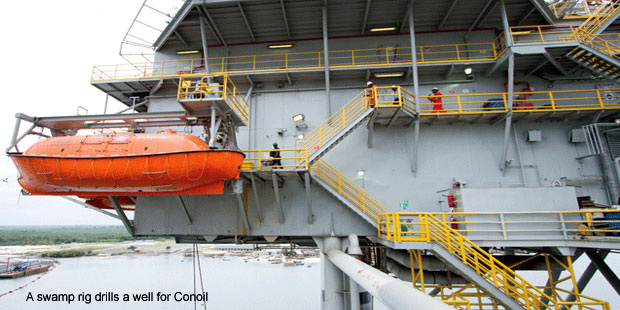 The Nigerian independent Conoil Producing, is struggling with declining production, less than a year it all seemed that the only way the company’s output could go was up.

Conoil’s current daily crude production is 14,000 Barrels Per Day, a 30% drop from the 20,000BOPD it achieved in April 2018 and which it maintained for most of last year.

The challenges to maintain output at 20, 000BOPD and even double it, as is the plan, have far less to do with the subsurface than above ground issues and largely centre around leadership.

“Operational/production efficiency is so low due to untimely maintenance of facilities”, ranking, impeccable sources in the industry, who are close to Conoil, attest.

The Otuo field has watered-out, due to poor reservoir management. The Ango field is doing far less optimally than envisaged.

New Mobile Oil Production Units (MOPU), under construction in the United States, are yet to be completed.

Conoil has been haemorrhaging smart technical talent in the last five years, without durable replacement.

Since Ebi Omatsola, the company’s founding Managing Director, left in December 2015, Conoil has seen off two managing directors. Omatsola ran the company for 25 years. None of his successors has spent 25 months in office. Taiwo Olusina, who was hired after his work at ExxonMobil and Afren, did not last a year. Nor did Mathew Willsher (Former MD/CEO of Etisalat), whose tenure was all of two months. Olusina Olonode, who currently occupies the office, is unconfirmed.

“The Geoscience/Technical department don’t have a say like it used to be when Omatsola, or for that matter Ayo Olatunde (former General Manager Geoscience), was there”, several sources contend.

Apart of Ayo Olatunde, who was very influential as General Manager Geosciences (and who has since moved to Seplat), key personnel who have left in the last five years have included Kayode Ayansina, General Manager Petroleum Engineering, Mike Adino, General Manager Operations and Akin Seweje, Commercial Director and  Executive Assistant to the company’s founder and Chairman, Mike Adenuga,

In 2015, the 29 year old company, Nigeria’s first real indigenous operator, signalled aggressive drilling and comprehensive exploitation of these assets and targeted 40,000BOPD by 2019, at the latest.  But that enthusiasm has waned.

Outside of the operated acreages, Conoil is not exploring the full benefits of the partnership it has with TOTAL, to allow the French major to operate the gas reserves in  in OML 136 and Oil in OML 257.