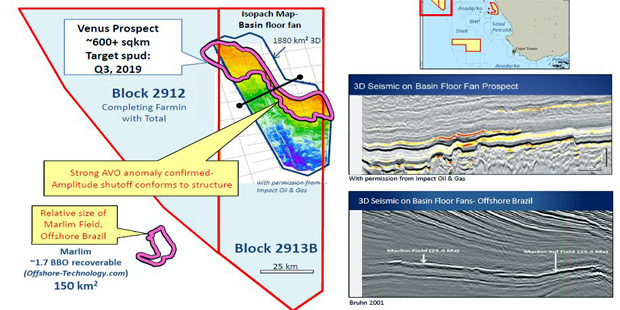 Norwegian oil and gas consultant Rystad Energy sees a resurgence in ambitious frontier exploration well drilling around Africa, in the next one year.

The continent, it says “appears to be emerging from a long hibernation in terms of oil and gas exploration activities,” and West Africa is the prime locale of these high risk wildcat activities and TOTAL, the French major, will be making most of the probes.

Two such supposedly significant prospects are to be drilled in the Mauritania-Senegal Basin, the flavour of the month for the past five years. “Located on the same structural ridge as the BirAllah and Tortue discoveries, BP’s Orca prospect is estimated to hold gross gas in place resources of 13 trillion cubic feet”, the Rystad statement says, adding  that “TOTAL plans to drill a well on Block C-9 in the Mauritanian basin. This particular well will target a large cretaceous oil and gas play”.

Rystad points to Egypt, where Dana Gas is currently drilling The Merak well a deep-water well in the Mediterranean, scheduled to be drilled to a planned total depth of 2,600 meters, targeting Pliocene turbidite plays along the well route. 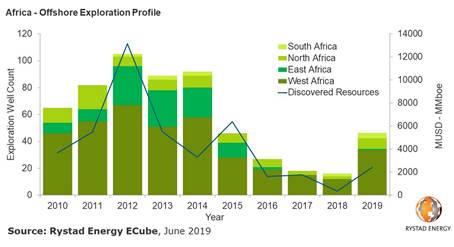 Rystad argues that a steep drop in the number of exploration wells in 2015 fueled by budget cuts, failed projects, and poor market conditions has meant that exploration in the region has mostly been on pause and declining further until this year, where an uptick in investments has reversed this negative trend, shining some light on African exploration.

TOTAL’s anticipated first well in Angola’s Block 48, in the ultra-deep-water Lower Congo basin will be targeting a high potential new play in the Miocene and Oligocene channels and lobes. Further down along the southern African coast, the company “aims to drill the deepest well ever completed in the continent”, Rystad reveals. “The Venus prospect is located in a giant basin floor fan of the Orange Basin and is considered to be the largest prospect ever in Namibia”.

The only well that may not be drilled anytime soon is the one credited to a rank unknown company named Trace Atlantic, which  is “currently hunting for a partner to farm out 50% to 70% of its stake” to drill with a frontier deep water floater targeting the Albian age Formosa prospect. Rystad provides neither the geologic basin nor the country location of this Formosa prospect.