The Lead Hunter Exits the Jungle 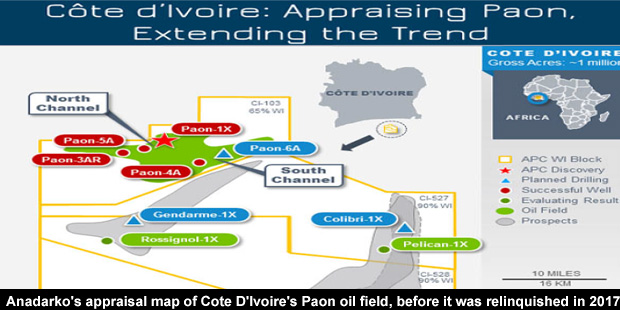 Anadarko has led the hunt for elephant size oilfields in the African frontier for a good part of the last two decades.

By this time next year, the company would have ceased to exist, with its entire shares purchased by Occidental Corp., which in turn would have sold the African portfolio to TOTAL, the French major.

What we will be left with are only memories of how the Texas based independent foraged the jungle, opening up basins long deemed un-prospective and inaugurating a class of American/European headquartered independents who have come to consider Africa as their primary heartland.

Anadarko has had a longer presence in Africa’s high proﬁle hydrocarbon economies than Apache Corp, Tullow Oil, or any of the leading western independents currently on the prowl for game on the continent. It drilled its ﬁrst well in Algeria in 1991 and made its ﬁrst oil discovery in 1993.  In 1995, SONATRACH approved the ﬁrst development plan, and production began in 1998. It is also  more of a wildcatter than the other leading Western independents operating in Africa.

Anadarko leads any other foreign company in Algerian hydrocarbon output, with 24.5% participating interest and operatorship of blocks 404a and 208 (Hassi Berkine, Ourhoud and El Merk fields) in the Berkine basin.  These fields represented a gross production of three hundred and twenty thousand barrels of oil equivalent per day (320KBOEPD) in 2018.

Anadarko was on the foundation floor of Ghana’s joining the ranks of the world’s sizable oil producers. In 2007, it funded, largely, the drilling that led to the discovery of the Jubilee ﬁeld in Ghana and proceeded to “decode” the deepwater Sierra Leone-Liberian basin with two discoveries (2009/2010). These outcomes re-awakened the global earth science consciousness of the West African Transform Margin.

The company led the way into Mozambican deepwater, in 2010, when it opened the Rovuma Basin with discoveries of three large gas ﬁelds: Windjammer, Barquentine and Lagosta, back to back. ENI drilled its own prospects in the same deepwater Rovuma Basin, a year later, and for those efforts, Mozambique is on its way to become the fifth largest exporter of LNG, by 2025.

Anadarko chased the opportunities it sighted in Ghana into neighbouring Cote d’Ivoire, where it discovered the Paon field in 2012.

But even the most talented super hunter sometimes returns home empty handed.

The attempt to find the onshore extension of the Rovuma fairway in Mozambique ended in a cul de sac. In 2015, five years after the discoveries of those large tanks offshore. The American independent h finalised the drilling of two wells, in the space of two months, without commercial success. Kifaru-, the second well, was even more disappointing than Tembo-1, which encountered relatively thin gas footage.

Nor could Anadarko go any further than wildcat drilling in the Sierra Leone-Liberian Basin. The Venus B-1, with 14 metres net hydrocarbon pay and the Jupiter-1, with 30 meters of hydrocarbon pay, did not indicate sufficient commerciality for the company to proceed to appraisal.

In Cote D’Ivoire, after two promising appraisals, the Paon structure, its satellite prospects and other plays in Anadarko’s other operated blocks in the country, began to act up. The Paon-6A appraisal well, an up-dip appraisal of the South Channel, did not encounter hydrocarbons. And Anadarko could not find commercial quantities of hydrocarbons in the Colibri-1X exploration probe, which had looked so promising on seismic.  After further evaluation of the well results, in the last quarter of 2017, the Company withdrew from all blocks in the country.

The oil price crash of 2014 affected Anadarko, like most of its peers. In that year it reported a loss of $1.75Billion.

Anadarko has, for most of the last five years averted its gaze from wildcatting in Africa and focused, mostly, on the Shale belt in the United States, as well as on the value that could be generated from its largest asset on the continent: the 75Trillion cubic feet of gas nestled in less than 1,7000metres of water in the Indian Ocean.

That is the biggest haul that any company buying Anadarko’s African Portfolio would be harvesting.