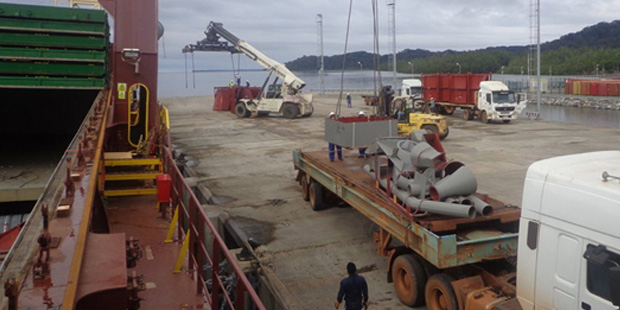 The Atlantic coast on the edge of West Africa will, in the near term, be teeming with LNG regasification plants.
Equatorial Guinea just announced it was building one, , after Cote D’Ivoire and Benin Republic went to town with declarations that TOTAL, the French major would be installing those types of facility on the countries’ coasts.

A news release last week said that a storage plant, built alongside the regasification plant will enable the storage, transportation and distribution of liquefied natural gas (LNG) to Equatorial Guinea’s mainland.

The storage plant will be located at the Port of Akonikien, on the southern border of Equatorial Guinea’s mainland. “12 bullet tanks will carry 14,000 cubic meters of storage capacity, supported by a truck loading station and 12-kilometers of ten-inch gas and diesel pipelines”, the release said. “The project will be led by local construction and engineering firm Elite Construcciones; It is part of Equatorial Guinea’s regional LNG2Africa initiative which seeks to drive gas monetization through in-country gas-to-power projects.

“The plant will enable the transportation and storage of LNG from the EG LNG plant at the Punta Europa Gas Complex on Bioko Island. It will then be fed into the regasification plant to be distributed to smaller-scale power plants and LNG power stations throughout the country, as well as exported to neighboring countries”.

“The tanks are currently the largest factory-built cryogenic bullet tanks in the world with a capacity of 1,228 cubic meters and dimensions of 31 meters by 9.3 meters by 8.8 meters. Built by American manufacturer Corban Energy Group, each tank is estimated to require 12 hours to complete the 12,000-meter distance from the port to the new plant. Elite Construcciones is also installing a truck loading station and 12 kilometers of 10-inch gas and diesel pipelines”, says the report.

OTAL had earlier announced signing an agreement with Republic of Benin for the development of a Liquefied Natural Gas (LNG) import floating terminal and the supply of up to 0.5Million tonnes per annum (MMTPA) of regasified LNG from TOTAL’s global portfolio to Benin for 15 years, starting in 2021. The company said it would “develop and operate the regasification infrastructure that will comprise a floating storage and re-gasification unit (FSRU) located offshore Benin and an offshore pipeline connexion to the existing and planned power plants in Maria Gléta”.

TOTAL had, even long before then, (October 2016) announced it had been awarded the rights to build and operate a liquefied natural gas (LNG) re-gasification terminal in Cote d’Ivoire with a capacity of 3Million tons per year. That project is, however, struggling.