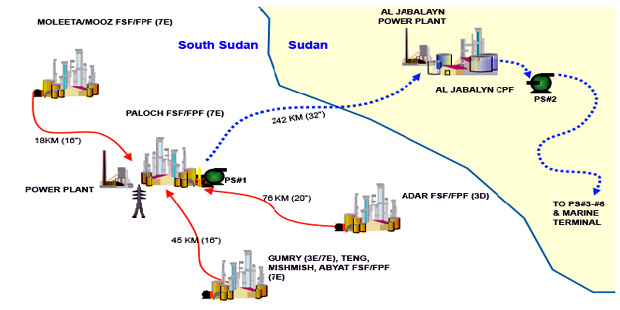 The news, announced by the African Chamber of Energy (ACE), contains no more details than that the reservoirs encountered may contain 300Million barrels of crude oil recoverable.

DPOC is a consortium of companies, led by the Chinese E&P behemoth CNPC, and including Petronas, Nilepet, Sinopec and Tri-Ocean Energy. The company’s website is not up to date and it doesn’t issue press releases.

DPOC has been the only operator producing oil in the five years since civil war broke out in the country in December 2013. Other companies have resumed production since late last year, riding on the new impetus in the country, bought on by a July 2018 peace accord with Sudan, the northern neighbour (through whose ports South Sudan imports equipment) and the signing of a peace agreement, in early September 2018, which reinstated rebel leader Riek Machar as vice president, formally ending five years of bloody civil war.

The company did announce, at a conference last year, that it had launched a drilling campaign at Paloch, Moleeta, Fal and Gumry fields, in its operated Blocks 3 and 7 with an estimate of 50 wells planned to be drilled in 2019.

ACE’s report of the discovery says that the well, which it did not name, was drilled at a total depth of 1,320 metres near the Adar oilfield in Block 3.

South Sudan had signed earlier this year an exploration and production sharing agreement (EPSA) with South Africa’s Strategic Fuel Fund for Block B2, described by ACE as highly prospective. It is hard to determine how that EPSA would work. The Strategic Fuel Fund is not an E&P company, even though it shares the same parent company, Central Energy Fund, with PetroSA, the South African state hydrocarbon firm.

The ACE report says that South Sudan will be launching a new petroleum licensing round at the upcoming Africa Oil & Power conference in Cape Town on October 9th, 2019