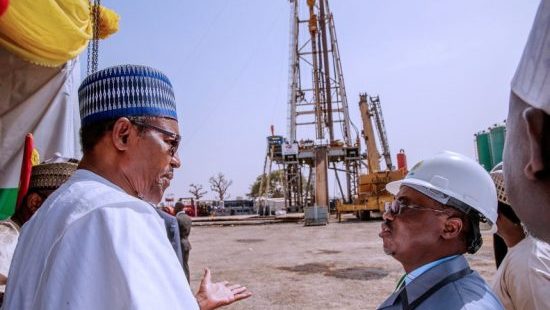 The Frontier Exploration Services (FES) Unit of the NNPC, the Nigerian state hydrocarbon company, has awarded contracts to Halliburton to run drill stem tests (DSTs) and tubing conveyed perforation (TCP) on the Kolmani River-2, in Bauchi State, in the Gongola Basin, in the country’s northeast.

In the industry, the application of DST (a tool for measuring reservoir flow rates), is usually an indication that the results of wireline logging have signaled that the well has encountered some commercial pool of hydrocarbon.

The company has kept a tight lid on information, but Africa Oil+Gas Report learns that several feet of natural gas and oil may have been encountered, although the case for commerciality is up in the air.

“The sand is better developed at this location and when we were to hang the 9 5/8 inch casing at some few feet deeper than 10,000feet (3,048metres), we were hardly able to find a shale level to hang”, one source enthused. “We are drilling with a water based mud, so there are no issues about the stability of the well bore”. The story changed in the 8 ½ inch hole, according to our findings. The rate of penetration of the drill bit was so low from 13,100ft to 13, 250ft, according to field report, indicating tighter formation.

Shell didn’t test the discovery well, but went ahead and booked 33Billion standard cubic feet of gas as possible estimated recoverable reserves, based on some petrophysical results. NNPC, however, aims to collect as much geosicentific data as possible. “We are taking lots of sidewall cores, lots of fluid samples for PVT. The results are looking good.” The new well is being drilled by the Drillog operated Rig 101.

A commercial sized pool of hydrocarbon in Northern Nigeria will change the entire dynamics of politics in Africa’s largest economy.