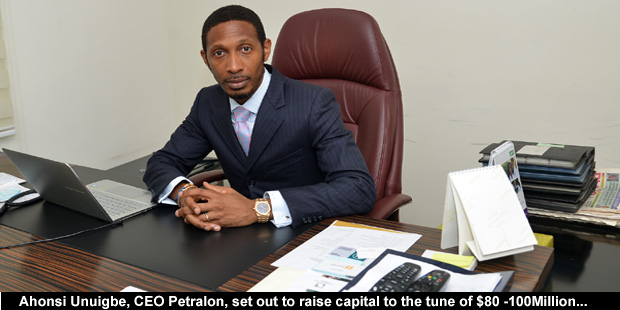 On a rainy July afternoon in Lagos, the hub of West African commerce, Ahonsi  Unuigbe is seated in his office, contemplating the next five years.

The former Citi Bank banker founded Petralon Energy only five years ago, put money into work in buying equity in a marginal field in the east of the Niger Delta Basin and is on schedule to resume crude oil production on the asset in the next month.

But that’s done. Unuigbe has moved on: he’s engaging putative partners for more asset acquisition. He is scaling up.

“Our core focus is to find and unlock oil reserves and oil production in the most cost-efficient way, using the best technology and the most efficient means, primarily in Nigeria to start off, then onwards to the rest of Africa”, he says. “We bring this same focus to our business in the midstream industry which is crude trading and supply”.

The capital injected by Petralon was expended in re-entering and side-tracking the existing discovery well drilled by Chevron in 1978. Its total investment from 2014 till present on the 14Million barrel (2P reserves) field is at circa $20Million. Petralon and the Joint Venture contracted a Crude Offtake and Purchase agreement with Shell Trading, but the difficulty of finding a viable evacuation route necessitated the shutdown of production activities until recently, when a new agreement involving an alternative evacuation route, via barging to an FPSO, with the same offtaker, will see the production resume in the month of August 2019. The venture aims to start at 2,000 barrels of oil per day, ramping production to 3,500 barrels of oil per day by 2H 2020.

Petralon aims to grow production seven-fold and net reserves by 500%.

A number of mid-size transactions are at different levels of progression. In one deal-in-the-making, the two subject fields hold 2P reserves of between 30 and 60Million barrels. A second transaction involves a relatively large acreage holding more than 100Million barrels in reserves. Petralon sets its sights on net production of 15,000 barrels of crude oil by year end 2023. Tall order.

Part of the drive to achieve this is assembling a stellar cast of Industry and business personnel on its board. Mutiu Sunmonu, former MD Shell Nigeria Limited is Chairman and shareholder in Petralon Energy. So is Aigboje Imokhuede, former Chief Executive Officer, Access Bank and founder, Coronation Capital, Tunde Folawiyo, an established business leader and head of the Yinka Folawiyo Group. These were all, with Unuigbe, anchor investors in the company.

In June 2017, Petralon partnered with the bespoke construction company Julius Berger Nigeria to provide construction and pre-fabrication works during the Operation and Maintenance stage prior to production of any asset it gets its hand on. They will also be involved in dredging and tug-boating activities for assets located in swamp or shallow water terrains. These roles are complementary to the partnership intention for Julius Berger to participate as an equity investor with shareholder rights in the acquisition vehicles.

Another partnership agreement exists with METSCO Oil, a Swiss-based outfit whose leadership team has extensive working experience in Nigeria with Addax Petroleum on two shallow water leases – OML 123 and OML 126 for nearly two decades. The team oversaw the growth of Addax production peaking north of over 70,000 barrels per day, following its acquisition of the aforementioned assets formerly owned by Ashland. “They understand the stratigraphy as some of the fields they’ve worked on are actually contiguous to the assets we’re looking at now. Same geology, same zones, some straddle zones. They also bring an access to an international European pool of investments to complement again our own alternative local and international investor pool which we have to tap into”, Unuigbe explains.

A third agreement is with a yet undisclosed international oil trader for offtake arrangements on acquired assets in exchange for funding.  Petralon Energy would be the operator/ licence holder of all three of these assets.

The assets that Petralon is targeting have different evacuation mechanisms; one asset makes use of the existing Trans-Forcados Pipeline route, the other two will have FPSOs stationed on the block which are in shallow water of about 50 metres. The success with Dawes Island has proven Petralon’s competence is working up a proven, low-risk asset. That’s the first phase.

This second part of its growth is to gain scale by committing acquisition and development capital to mid-sized producing/near term production assets, aimed at materially improving its production and reserve base. For this end, the company has set out to raise capital from the Nigeria market to the tune of $80 -100Million, thus bringing in new shareholders to the company. It has also commenced discussion around credit facilities that are medium-termed structured which tie into the project payback period with two financial institutions. This equity and debt capital mix, complemented by other funding sources such as offtake financing will be used to fund the Company’s acquisition and development funding requirements for the target assets.

CEO Ahonsi Unuigbe’s financial industry background comes to play here. He is a recipient, he says, of the project financing award for the first Reserve Based Lending (RBL) by an indigenous company for OML26 by First Hydrocarbon Nigeria(FHN) which was done in 2011 and later refinanced by Access Bank. “We run sensitivities and scenarios as proper finance people do, looking at the low case scenario and unless a project is sustainable at a low case oil price environment, we do not take it on. All the projects we’re talking about are sustainable at $45 oil per barrel. $40 oil just means the payback period is longer…what you thought was a three to four-year payback becomes a seven to eight year payback”. The acquisition and financing of the three assets is the core focus of the company from this year till the next. Petralon Energy has a financial and technical service role in all three assets it is seeking to operate. The first of the three assets to reach finalization of agreement prior to production will likely be by Q4 2019. Two of those assets presently producing, will be primed for further increase while the third will take a year and half to reach production status.

Born and raised in Lagos Nigeria, Ahonsi Unuigbe schooled in Nigeria, completing his university and higher-level education in United Kingdom. He started off his banking career with Citi Bank, worked and lived in various places – Nigeria, Dakar, Abidjan, Paris. He later joined Standard Bank, where as a General-Manager, he initially led the banks Project and Structured Finance Group and subsequently had responsibility for the Public Sector and International Organisation Coverage within Standard Bank’s subsidiary Stanbic IBTC. He was also seconded by the bank, as an Adviser to the Minister of Finance under the administration of Olusegun Obasanjo, then later as the Pioneer Commissioner in charge of Budget, Planning and Economic Development in his home state of Edo during the first tenure of Adams Oshiomhole.  Married with four children, he likes to play tennis.

This young company aims to become a Nigerian operator in the interim and a regional operator subsequently, branching into upstream activities in other West African countries, with an eventual dual listing in a foreign and local bourse. All within his 5-year growth plan. Ambitious target for this driven individual with Pan-African and International aspirations.