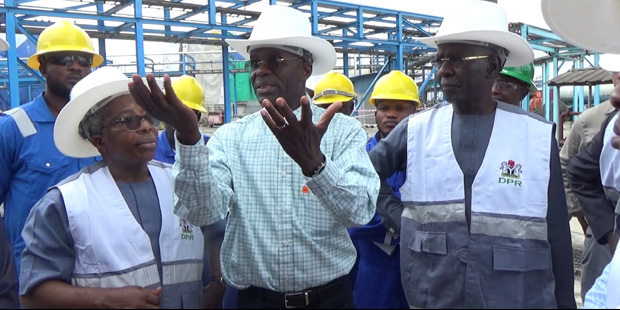 Layi Fatona, Managing Director of the Niger Delta Petroleum Resources, says the way to go for Indigenous Nigerian E&P Companies is to become integrated and convert the hydrocarbon resources, from raw molecules, in situ.

He was speaking to the highest ranking personnel in the Nigerian regulatory agency, on site for a Pre-commissioning visit to the 5,000Barrels Per Stream Day refinery on the Ogbele oil field facility in Rivers State, in the east of the country last weekend.

The regulators were visiting Ogbele in the same weekend that Emeka Ihedioha, governor of Imo State, was visiting the Ibigwe oil field facility, operated by Waltersmith Petroman, another Nigerian independent, and located 120kilometres to the east of Ogbele. Like NDPR’s doing in Ogbele, Waltersmith too is constructing a 5,000BSPD refinery on Ibigwe. “We told the governor we are creating a hub for an Industrial Park and an export free zone”, Abdulrazaq Isa, chief executive of Waltersmith, told Africa Oil+Gas Report. The Ibigwe refinery construction, which commenced late 2018, is 60% advanced and it is considered, in the company’s planning, as a first phase of an Industrial park, which will include a power plant, an expanded refinery and site for construction of hydrocarbon related products.

Like Fatona, Isa has severally argued that the model of extracting crude oil and exporting all of it from Nigeria, a country with nearly 200Million people consuming imported petroleum products, is wrongheaded. And the companies with the moral responsibility for leading the charge in beneficiating the raw hydrocarbons are the Nigerian independents, who already operate over a quarter of the country’s total crude oil output.

Back to Ogbele, the 5,000BSPD refinery is the first of a two phase expansion of the 1,000BSPD topping plant commissioned in 2011, which produces 86,000Litres of diesel every day from 540Barrels of Oil. The facility, christened Train 2, will produce Jet-Fuel, Marine Diesel, HFO, Naphtha and more Diesel.

Technical officers from the DPR (different from the big wigs hosted by Fatona) were on site doing the actual pre-commissioning tests with NDPR technicians. “As soon as our men that are on ground here turnedin their reports and we are satisfied with the reports, we will give the go ahead for the plant to become operational”, Shakur told Africa Oil+Gas Report.

Femi Olaniyan, head of the Ogbele refinery project, told the visitors that the 1,000BSPD topping plant had produced about 137Million litres and the company had sold 134Million litres to the public, in the eight years of operation. “We have barely consumed about 3Million litres while the balance has been sold to the public”, Olaniyan explained. “The first turn-around maintenance was done in 2014 just about 2-3 years after the plant became operational and we did not find any surprises, we just cleaned the equipment’s and restored it back online.

“Capacity utilization has been 90% but we have had constraints because it is a mono product refinery so the rejects from the refinery go back into the pipeline. So, when we had the rude boys in the creeks damaging Shell pipelines, we have tank-tops and can’t return the rejects into the pipelines. That affects our up time on the refinery and it is part of the reason why we are doing multi product slates in the expansion.

“It’s a small plant with a small footprint of 1900sqm and we pride ourselves as producing the best diesel in the country. Look at the properties: Flash point ranging 66-72oC, Specific Gravity is 0.86 and it has a clear appearance. People always come back here to buy the diesel. We have this network provider MTN and they always send their suppliers to come and pick up diesel from here to run their masts because it is efficient and reliable and of good quality”.

Mr. Shakur, the DPR director, responded warmly to the NDPR management. “With the regulatory powers residing with us”, he told Fatona, “nothing would prevent us from making you a reference point to other marginal field operators.

“We will replicate your type and just like you said, if we can have ten of your types, the issues of Niger-Delta restiveness would reduce, the money that the government is using for “cost recovery” if I many use NNPC slang, would have gone away and then you can see the backward integration that this could have had in our economy”.